Don't You Listen?: A Profile of Tona Walt Ohama

'He was quite something!'

Colin James and k.d. lang bassist Dennis Marcenko remembers ‘gentle soul’ Ohama when he was back in (all) black. 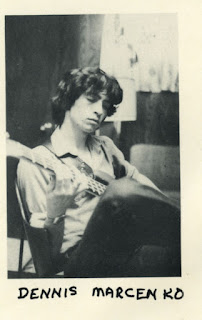 I met Walt through Bruce (Toll, Marcenko’s roommate) in the early ’80s. I remember seeing Walt walk down the street; he was one of the first guys I saw with spiky black hair, all black clothes, black fingernail polish and eyeliner. I thought, “Wow, who’s this guy?” He was quite something. But he was such a gentle soul, too.

We lived close to the Plaza Theatre in Kensington and Walt would come over. Ulrike (Voll, artist and Marcenko’s girlfriend at the time) taught him how to pronounce (German industrial band) Einstürzende Neubauten. She had him repeat it over and over and they practised it until he got it right. He liked her art so much he used it on one of his albums. That’s her and I (on the cover of Love Only Lasts Awhile).That was taken from a photograph.

I always felt Walt was really cutting edge and I never really felt in the same league as him. So I was really quite impressed and honoured when he asked me to play on some of his stuff. I remember staying the weekend when we did The Call.

I remember doing some pretty crazy things. I took a drum cymbal, laid it on the floor, then turned my bass on and just scraped the strings with it. To this day, I want to see rules broken. I want to see people push boundaries. That’s what Walt was really good at.

The one thing I remember about his parents is the communication they would have with him. They were very soft-spoken and very gentle. They saw that he had a vision. They saw he had a direction. I don’t think they understood what it was he was doing but there was a lot of love in the room.

We last chatted right after (Ohama released) Thick as a Brick. Next time I come to Calgary, I’d like to spend time with him in the studio again.

NEXT: 'This could be a head or organ!': Liz Janik

SECONDARY FEATURE: Music is the Master — Ohama discusses his records

SIDEBAR: 'She dismissed me as a jock!': Eric Duhatschek