Don't You Listen?: A Profile of Tona Walt Ohama (Part 1) 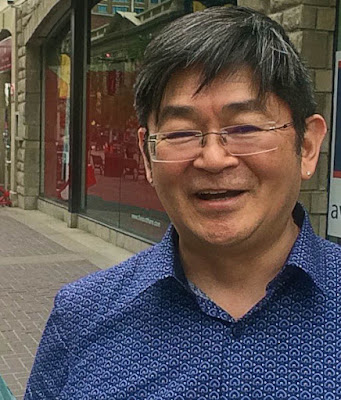 CALGARY, CANADA — Tona Walt Ohama greets Bongo Jazz mid-day, mid-week, on a downtown street in Calgary. He’s tidily dressed in dark slacks and a blue patterned dress shirt; streaks of grey in his black hair are the most visible reminder he’s in his fourth decade of making music.

Despite having fans around the globe, the Canadian electronic music pioneer can wander his neighbourhood, and his city, in anonymity.

“I should warn you, I live fairly minimally,” he says. “I can’t even offer you a coffee. If you want one, you can get one at the shop over there.”

Java declined, we enter a building and walk up a long flight of stairs to his one-room apartment, which doubles as his recording space. The dim, window-less room is mostly lit with red Christmas mini-lights strung along walls lined with books, DVDs and compact discs. Classic rock, prog rock and Prince are clearly favourites.

There’s a vocal mic at the back of the room; to the left, two keyboards — including his first synthesizer, an ARP Axxe bought in 1975 — sit on stands below Mandy Tsung’s painting Cinder (used for the cover of Ohama’s 2017 album, Grrlz Monosynth Tower). On the floor, there’s a twin-bed mattress beside stacks of vinyl; Mott the Hoople’s 1974 The Hoople and Alice Cooper’s 1973 Billion Dollar Babies are the facing covers.


The apartment is a tight fit for two people (Mia, his wife of four years, lives in the apartment next to him) yet this is where Ohama has recorded all of his music since 2010, a decade that has proven to be the most productive and artistically restless of his career.

A few weeks prior, Ohama hosted an artist reception at Arts Commons to launch his latest project, a 15-speaker ambient music installation A Moment Of Quiet Reflection In Downtown Calgary, which runs at the multi-venue arts centre until Aug. 31.

“A woman came up to me and said, ‘You know this guy Walt Ohama? He used to do this music in the ’80s.’ I said, ‘Yeah, I know him.’ Now that’s not being recognized,” Ohama says, laughing in a way you can’t help but hear some hurt.

He has, after all, assembled a remarkable body of work (see secondary feature Music is the Master) since the release his 1982 cassette-only debut, Midnite News. Never one to chase trends, Ohama simply follows his muse and that has led him over the years to create college radio synth-pop hits (Julie is a TV Set, My Time, Where Do You Call Home?), scores for movies and animated shorts, a stunning reinvention of a Jethro Tull prog-rock classic, collaborations with female singer-songwriters and a number of ambient works that have bathed Calgary’s downtown core in sound.

An uncompromising singer, songwriter and producer driven by a singular vision, Ohama’s achievements are truly his own. He has recorded in a series of homemade studios — one, famously, in the basement of his family’s potato farm in Rainier, Alberta — and has remained an independent recording artist by choice.

It’s a decision that has puzzled some over the years, including the late Calgary Herald music writer James Muretich, who Ohama recalls approached him at the underground music club and arts space Ten Foot Henry’s with an offer he did refuse.

“James was so impressed with my show, he came up to me afterwards and he said: ‘I have contacts with record company people if you’re interested. Maybe you should send your things to them.’ And I said, ‘I’m not interested, James, thank you.’ ” Ohama laughs. “And that just drove him crazy.”

Muretich isn’t the only one who’s been left bemused by Ohama. Even to those who’ve known him for decades, Ohama remains an enigma.

“I don’t know if I ever did know Walt,” says bassist Dennis Marcenko, who recorded with Ohama in the mid-’80s. “I’m not sure how many of us actually did.”

“He would let you get glimpses into his personality,” adds Marcenko, “and then sometimes he would just smile and not say as much. He was an observer. We definitely got along but he was all alone in his thoughts and in his ways of thinking. Whenever he’d tell me a story or share something with me, I always felt very lucky.”

And now it’s Bongo Jazz’s turn to feel lucky. Ohama says he doesn’t usually allow people into what is, quite literally, a studio apartment — but invites us to look around and ask him anything.

“You know why I’m doing this? Now that I’m a little older, I feel it needs to be documented a little bit,” says Ohama, who turns 59 in January. “My music exists but nobody really knows me. Not really. When I did the Arts Commons thing, they don’t know who I am. I think I need to be known a little bit for what I’ve done over the past 30 years.”

With that, Ohama settles in for the first of two lengthy interviews with Bongo Jazz; this fascinating, private recording artist, graphic designer, sound designer, computer programmer, potato farmer, street sweeper and dishwasher opening up about his family, his recordings and the reasons he twice gave up on music — and almost gave up on life.

SECONDARY FEATURE: Music is the Master — Ohama discusses his records

SIDEBAR: 'He was quite something!': Dennis Marcenko
SIDEBAR: 'This could be a head or organ!': Liz Janik
SIDEBAR: 'She dismissed me as a jock!': Eric Duhatschek