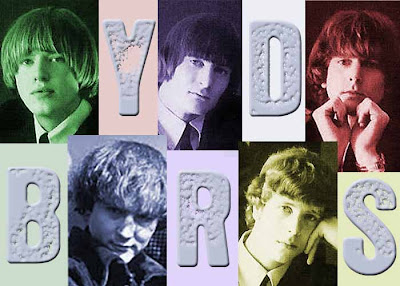 Official history shows the original lineup of the Byrds stayed together long enough to record two classic 1965 albums before reassembling eight years later for a largely uninspired, one-off reunion disc. Case closed. That's all she wrote.
Well, not quite. In May 1970, Gene Clark — the Byrds' best songwriter and first original member to fly the coop — convinced all four of his former bandmates to perform on She's the Kind of Girl, his first new solo single following the dissolution of his country-rock duo Dillard and Clark. (Two months later, the five original Byrds would record the single's B-side, One in a Hundred.)

Clark's powers of persuasion were not strong enough to get these warring factions together in one studio and one time — nevertheless, once the sessions were complete, the world had two more Clark compositions featuring Roger McGuinn on ringing 12-string guitar, David Crosby on harmony vocals, Chris Hillman on bass and Michael Clarke on drums. And just like the old days, the producer is Jim Dickson, who helmed the group's pre-Columbia recordings (later released on Preflyte). The only other musician on the track is L.A. jazzman Bud Shank, whose flute solo is a defining element on what is otherwise a great, lost Byrds single. She's the Kind of Girl could have fit snugly on either the Mr. Tambourine Man or Turn! Turn! Turn! albums, and it's certainly better than almost everything on that surprisingly lifeless, self-titled reunion disc. The fact it hasn't been included on either of the two Byrds box sets verges on criminal.

Perhaps Clark's label, A&M, didn't like this sadly beautiful ballad, or didn't recognize the value of a virtual Byrds reunion, but She's the Kind of Girl/One in a Hundred was never given a proper release at the time. Both tracks were eventually released on Roadmaster, a 1972 Dutch compilation of Clark off-cuts.
She's The Kind of Girl (link expired)
Undeterred by the aborted single, his next two solo albums, 1971's Gene Clark (aka White Light) and 1974's No Other, were both singer-songwriter classics (but, tragically, only recognized as such following his death in 1991). From the latter, here's the former Byrd performing Silver Raven: