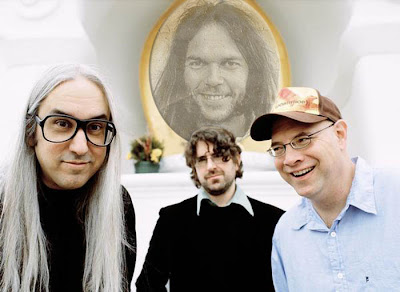 Apparently Neil Young was a contrary ol' git even when he was a young man. In February 1979, a 33-year-old Young secured a Rolling Stone cover story (pictured below) to promote his then-current album, Comes a Time. Problem was, speaking to writer Cameron Crowe, the musician could barely muster a spark of enthusiasm for the record and its comfy country-pop. 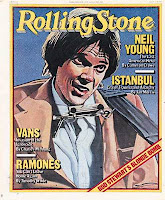 "It's in the middle of a soft place. I hear it on the radio and it sounds nice," Young said dismissively. "But I'm somewhere else now. I'm into rock and roll." (True to his word, just eight months later, he'd release the edgier, punk-inspired Rust Never Sleeps.)

Certainly, Comes A Time isn't among Young's landmark recordings but the album does contain a lot of good songs, including the original acoustic version of today's post. That same year, Nicolette Larson (who sang on Comes A Time) gave Lotta Love a sunny, California-pop makeover and the song surged into the top-10. Hers is a great version but, again, not rock and roll. A decade later, the original Dinosaur Jr. lineup made the unlikely decision to cover Lotta Love for The Bridge, a 1989 alt-rock Young tribute album. Their rendition imagined a world where Comes A Time was recorded with Crazy Horse while the band was all hopped up on cheap amphetamines and powerful hallucinogens. Oh, and incidentally, that's a good thing.

Frontman J. Mascis sounds utterly unhinged, the pitch and meter of his vocals careening like a drunk on the highway. The guitars aren't just loud but tinnitus inducing, drenched in distortion and feedback. And Lou Barlow and Murph's attempts at vocal harmonies are hilariously hapless, especially at the end of the bridge, when what's supposed to be sweet "woos" sound more like the cries of a wounded animal. The overall effect suggests a three-piece band in which no one is aware, or cares, about the others are playing. (Should we be surprised this lineup fell apart before the year ended?) This is as far as you can push the shambolic envelope without the music collapsing into unlistenable chaos.

Dinosaur Jr.'s Lotta Love would have given that 33-year-old Neil Young wet dreams. It is not in the middle of a soft place. It is not nice. It is very rock and roll.

For comparison, here's the late Nicolette Larson lip-syncing (and poorly at that) to her hit version of Lotta Love in a 1979 promo clip. I can only assume from this video that all men in her band were forced to grow unflattering facial hair. It was probably a fetish or something.