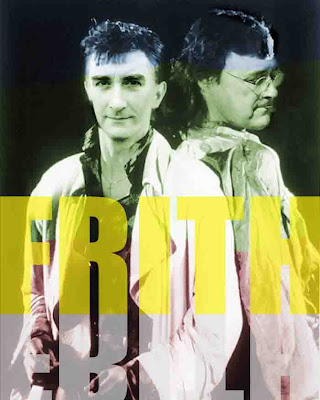 Dancing In The Street by Martha and the Vandellas is, without question, among the greatest recordings of the 20th century. Don't take my word for it: Ask members of the Library of Congress, who've chosen to preserve it in the U.S. National Recording Registry. So, you'd think other artists would leave well enough alone. Alas, this hasn't been the case and we live in a world with too many renditions of this Marvin Gaye-William Stevenson-Ivy Jo Hunter composition: most are simply adequate (Mamas and the Papas, Cilla Black); a few border on criminal (Van Halen and the excruciating Bowie-Jagger duet). 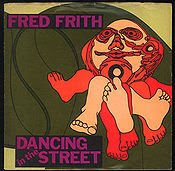 There is, however, one non-Vandellas version of Dancing I very much enjoy — you'll find it on Gravity, the second Fred Frith solo album and first following the demise of his British avant-garde aggregation Henry Cow. The 1980 album proved a surprisingly commercial venture — relatively speaking, of course — and Dancing in The Street, paired with Frith's own My Enemy is a Bad Man coda, was its flagship single (pictured left). Let's just say it didn't exactly challenge Christopher Cross or Air Supply for chart supremacy that year. Give it as listen and you'll hear why.
Frith's version may have an infectious, swinging groove but that's where the similarities with the Vandellas' classic end. Rather than strive for euphoria, Frith aims for disorientation and strangeness. The melody is seemingly played with one finger on a high-pitched synth, vibrato set to 11, not unlike The Tornados' otherworldly Telstar. However, one's attention is not captured by the awkwardly rendered melody but what's going on in the background: a muted cacophony of electronic noise, heavily distorted human voices and, if my ears aren't fooling me, the sound of barking dogs and power saws. Essentially, this single inverts how we normally hear music: We're compelled to listen through the familiar melody and beat to discern what's happening in the background, even though that's the most non-musical element of the song.
If you're going to cover Dancing in the Street, you better bring your own thing to it — and Frith certainly does that here.
Dancing In The Street/My Enemy is a Bad Man (link expired)
One more interesting version of Dancing in the Street for you today, courtesy of YouTube. From the All-American College Show in 1968, here is the Dick Carpenter Trio — who you'll recognize as The Carpenters with a bass player — who take the song in a decidedly Booker T and the MGs direction. The video quality is poor but it's still worth watching for the host's introduction — "Incidentally, she's a fine singer, too," he says of Karen, the group's drummer — and for the finale, where Zsa Zsa Gabor and William Shatner present the trophy and prize money to the future easy-listening superstars.