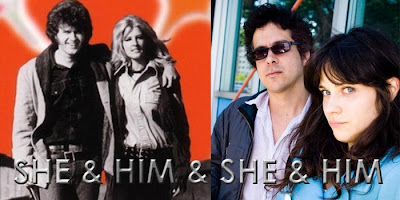 There was a She & Him long before Her & That Guy. She & Him, of course, is actress/singer/songwriter Zooey Deschanel and multi-instrumentalist M. Ward, whose debut album Vol. 1 was one of the left-field hits of 2008. Deschenel's sweet, melancholy-tinged vocals wrapped in Ward's gentle country/folk/pop arrangements proved to a beguiling combination but not necessarily an original one. She & Him have drawn comparisons to countless acts and, today, I'll throw out a rarely mentioned antecedent: The Poppy Family, a Vancouver-based group led by another she-and-him partnership, Terry Jacks and his then wife Susan. Their two albums, 1969's Which Way You Goin', Billy? and 1971's Poppy Seeds, would not only appeal to fans of She & Him but also to anyone with an affinity for late-'60s, early-'70s soft-psych. Their music is ripe for rediscovery ... and more eclectic than you might remember.

The Poppy Family are best known for the title track of their debut, a No. 2 hit in the U.S. in 1970 and still a staple of easy-listening radio:

And 1971 brought the Poppy Family's best single, Where Evil Grows, which peaked outside of the U.S. top 40 despite sounding infinitely groovy (that riff! that sitar! those harmonies!) The song may have underperformed in the U.S. because its sinister lyric provided an unwelcome and likely unintended reminder of the Manson Family murders, still fresh in the American psyche. Thirty seven years later, this remains one of my all-time favourite songs:

Which Way You Goin', Billy and Where Evil Grows are very different songs and yet the group also could play straight-up country (1972 single Good Friends — very She & Him) one moment and soft-psych freakouts the next. Today's post, from the Poppy Family's debut disc, falls into the latter category.

"When Joey died, Marie went mad," is the song's outstanding opening gambit (not including the eerie spoken-word intro in which Susan's voice is varispeeded wildly.) The band embraces this unhinged spirit, with fuzz guitar and organ soloing almost free-form and Susan bellowing like Grace Slick after ingesting the bad brown acid. If you remember The Poppy Family as soft-pop peddlers, There's No Blood in Bone will confound your expectations.

Terry and Susan Jacks divorced in 1973 and the Poppy Family disbanded. They would both embark on solo careers and Terry even enjoyed an international chart-topper with 1974's ghastly Seasons in the Sun. But neither would reach the artistic heights they scaled together.

Let's end this post as it began, with a little She & Him. Here the video for Vol. 1's first single, Why Did You Let Me Stay Here?