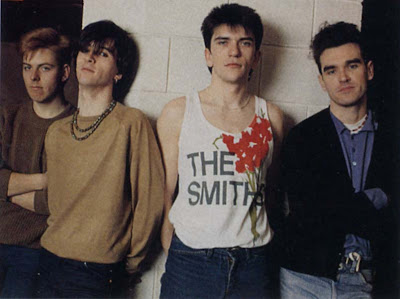 Another Smiths compilation; another missed opportunity. Rhino's two-disc Sounds of the Smiths best-of arrives in stores next week, boasting a fine track listing and much-needed remastered sound supervised by guitarist Johnny Marr. The first CD rounds up the usual singles, most of them timeless; a second CD cherry-picks album tracks and B-sides that haven't appeared on previous compilations. So what's this missed opportunity? 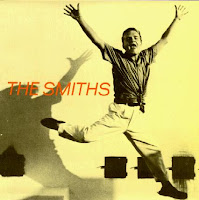 The Smiths' late-1985, 12-inch single, The Boy With The Thorn In His Side (pictured left), contained two excellent non-album B-sides, Rubber Ring and Asleep, which were effectively conjoined. These tracks would make regular appearances on subsequent compilations — 1987's Louder than Bombs contained both – but they were always separated for some inexplicable reason. (Sounds of the Smiths contains Asleep but not Rubber Ring).

Perhaps someone in the Smiths doesn't like the segue from Rubber Ring to Asleep. If so, he's wrong. These Morrissey-Marr songs fit like, um, hand in glove (sorry, couldn't resist); as originally released, they combine for eight uninterrupted minutes of Smiths bliss.

Fans of the legendary Manchester band will likely have to wait for the inevitable Smiths Singles CD box set to hear the combined Rubber Ring/Asleep in remastered digital sound. Until then, enjoy this vinyl rip.

And here's the none-more-'80s video for the A-side, which would later appear in remixed form on The Queen Is Dead.

please could you reupload your vinyl rip ? I got the two tracks ( separated ) on Smiths best of but i never heard the original conjoined 'Rubber ring/Asleep' from the single 'The boy with the thorn on his side'
Since i haven't got a lot of money i don't want to buy another ( there are a lot of ! ) Smiths best of to finally get it.
Thanks