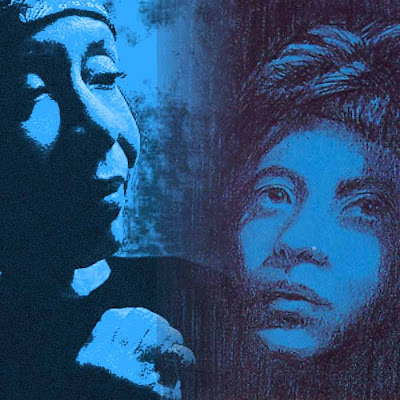 Last weekend, as I watched a preening Beyonce belt out a lung during her SNL musical performances, I was faced with a horrible dilemma: Do I poke out my eyes first, or chop off my ears? In the end, I opted for a third option: Mute the TV and go feed the cats. Less blood. Nevertheless, my initial reaction sums up how grating I find Beyonce and her diva contemporaries: They may have the ability to sing on key without the use of Auto-Tune but remain painfully oblivious to the concept of nuance, opting to deliver lyrics as if they should all end with an exclamation point.

Oh, what they could learn from singers like the late Shirley Horn, an exceptional jazz pianist who also happened to be one of the genre's greatest ballad singers, thanks to her smoky, seductive voice and impeccable, understated phrasing. Her best recordings are enticingly intimate. Rather than attacking the music and lyrics, she caresses them, gently and unhurriedly. If your heart doesn't skip a beat listening to Shirley Horn sing, you may already be dead.

Today's post is from Loads of Love, one of two pop-vocal albums she released on Mercury in 1963. (The other being Shirley Horn with Horns.) My Future Just Passed was originally a peppy little number performed by Victor studio band The High Hatters in the 1930 musical-comedy Safety in Numbers. Horn's version has some altered lyrics and an almost glacial tempo, both of which change the song significantly. Whereas the High Hatters' version sounds like harmless trifle (you can download it here), Horn's rendition is dark blue and desperate, as her case of love-at-first-sight turns into heartbreaking realization fate might not be an ally and her soulmate could belong to another: "Life can't be that way/ To wake me then break me," she whispers, with slight reservation, as if she really knows life can be that way.

Yet, in the liner notes to a 1990 reissue of Loads of Love, Horn dismisses her vocal performances on the Mercury albums. "When I made those records," she said, "I hadn't experienced enough to know what the song lyrics meant; I hadn't lived them yet."

Horn put her musical career on the backburner following those 1963 Mercury discs and focused on family life for the ensuing 15 years. She began touring again in 1978 and released a series of critically acclaimed, Grammy Award-winning albums for Verve starting in 1987. In 2002, she had a foot amputated due to complications of diabetes but she continued to perform and record until succumbing a massive stroke in 2005. She was 71. Here is Ms. Horn in her latter years, looking frail, but still able to sing circles around pop stars a half-century her junior.

I adore Shirley Horn. I was fortunate enough to see her in concert twice before she died. You are absolutely right about the superiority of her style over the histrionics of singers like Beyonce, Mariah, and Christina Aguilera. "The Main Ingredient" is my favorite of the Shirley Horn albums that I've heard.

Any chance you could repost this song?

You've seen Shirley twice? I am envious! As for reposting, there's no need: I haven't removed it yet and I double checked the link and it works for me...

Got it now, thanks. Shirley performed more than once at the Atlanta Jazz Festival, so I even got to see her for free both times. The last time was not long before her death; she was no longer able to play piano, and I got chills as she sang these lines from "A Time for Love": "As time goes drifting by/ The willow bends, and so do I..."

I think that Diana Krall owes a great deal of her vocal style to Shirley Horn. Would you agree?