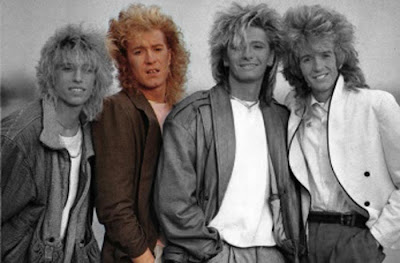 Bongo Jazz was saddened yesterday to hear about the death of Kenny MacLean. For most, he will be best remembered as the bass player for Platinum Blonde, a hugely popular band in Canada during the mid-'80s who were, admittedly, thinly guised Duran Duran copycats. Suffice to say, Platinum Blonde were not my kind of thing and, as a young music writer learning the ropes, I surely took a few good swings at 'em in print at the height of their success. I thought they were fakes, flawlessly designed by accountants in some music industry boardroom to con 16-year-old girls to part with their money (and, at their concerts, with sundry items of clothing.) At the time, I thought musicians fell into two categories: those with integrity and those without, and the four members of Platinum Blonde fell into the latter category.
I had a lot to learn and Kenny MacLean provided a lesson I've never forgotten. In 1986, I chatted with MacLean over the phone to promote an upcoming concert at the 20,000-seat Pengrowth Saddledome. The show fell during Calgary's annual Stampede Week. MacLean was a good sport despite putting up with an interrogation, er, interview technique that can only be described as Defend Your Life. Near the end of the conversation, MacLean inquired what other acts were playing in the city during Stampede week. I mentioned The Everly Brothers were at the Saddledome the night before Platinum Blonde — and MacLean flipped out. He said he loved the Everlys; he mentioned he was in town that evening; he needed a ticket. I had an excellent pair of seats and no date, so I offered my extra ticket to MacLean. To my surprise, he accepted the offer and, an hour before showtime, I met a member of the dreaded Platinum Blonde at the hockey arena.
There was nothing 'fake' or 'manufactured' about MacLean's excitement that night. In fact, he reminded me of the girls I'd see at Platinum Blonde shows. He wanted to go to the merchandise tables and buy a T-shirt, and, omigod!, wondered if I had enough pull to get him backstage to meet Phil and Don. (I didn't.) He was dressed down that night — just a pair of ordinary jeans, a non-descript button-up shirt and hair that appeared untouched by any Vidal Sassoon product. Nevertheless, as we walked through the concourse, I could tell many of the kids who were dragged by their parents to see this lame-o show recognized MacLean. He was gracious and accommodating to all the teenaged fans who approached him for an autographs or to pose for a photograph. As the kids surrounded MacLean, a man likely twice their age, I surveyed the parents as they stared at this unassuming (albeit impossibly svelte) fellow. I suspected what they were thinking: This guy is a rock star?
Funny, I was beginning to think the same thing.
MacLean and I finally took our seats and, with a few minutes before showtime, we just shot the shit. We talked about the new records we liked; the songs we hoped the Everlys would sing. I mentioned I liked his previous band, The Deserters, and thought they recorded some pretty good material before losing their way. MacLean said he was proud of the Deserters and wished they could have paid the bills. Platinum Blonde, he said, didn't make the sort of music he personally enjoyed but, as a professional musician, it was good to have a steady gig, play high-energy music before big, adoring crowds, and tour with bandmates he genuinely liked. He felt blessed. And I thought to myself: Really, is that so bad?
Soon the lights went down, the Everlys took the stage and MacLean transformed into someone I recognized: a music fan, kind of like myself. Phil and Don's harmonies obviously lit up MacLean's pleasure centres; he whooped and cheered every song with unreserved glee. Sadly, I had to leave the show before its conclusion to file an early review; I wish I could have stuck around, to hear more Everlys, but moreso, to soak in MacLean's good vibes.
Platinum Blonde didn't have many more good years. As bands of this ilk are wont to do, they tried to go 'respectable' and 'adult' with an ill-fated 'funk' album and soon thereafter it was all over. Undeterred, MacLean stayed busy over the next couple decades, recording the occasional solo disc, playing sessions and helping developing artists. His sister found him dead Monday in his Toronto apartment.
I'll always remember him for that Everly show, and how he loved this song:
Let It Be Me (link expired)
Finally, here a video of MacLean performing Don't Look Back, the title track of his first post-Blonde solo album. Very Beatle-y, and a mighty fine song.

What a great tribute.

Kenny was always supportive of everyones endeavours into songwriting and performing.

He will be truly missed.

Thanks for the kind words, Tami. I wouldn't say I knew him in any significant way but, from what I saw, he seemed a good, good man who truly loved music. Strangely, the 'truly loves music' bit is not always the case in the music biz.