One of the pleasures of flipping through old music magazines is finding those woefully misguided advertisements that surely remain a source of embarrassment for the acts they were intended to promote. Today, I thought I'd scan a couple to share with you.

Typically, an ad is placed to hype a hit. Here is a rare example of an ad inspiring a hit: 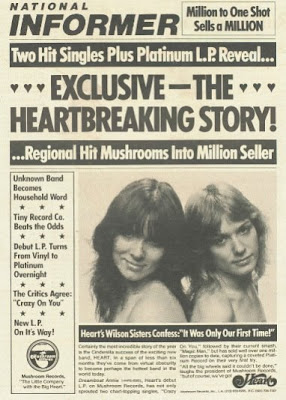 In 1976, Heart's debut album Dreamboat Annie had become a left-field million-seller and the group's label, Vancouver-based Mushroom Records, patted itself on the back with this National Enquirer-styled ad that appeared in December of that year.

In the end, tiny record co. beat itself.

The ad also pictured Ann and Nancy Wilson, seemingly topless and back to back, above the headline, "Sisters Confess: It Was Only Our First Time." The sisters were so appalled by the implication they were lesbian lovers they broke their contract with Mushroom, not long after this ad appeared, and signed with CBS affiliate label Portrait.

Barracuda, the leadoff single from Heart's first Portrait album, was inspired by the above ad; many of Ann's lyrics (You lying so low in the weeds/I bet you gonna ambush me") are surely directed at Heart's former label.

Next up, this gem from Fall 1981, promoting U2's sophomore album October. 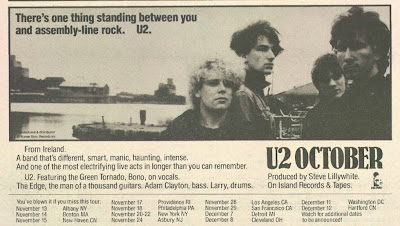 The band is described as the "one thing standing between you and assembly-line rock," a reminder these future rock superstars were once simply upstart newcomers, considered longshots to knock the likes of Foreigner, Journey and Styx from their lofty perches. (To be fair, all three bands have played to bigger audiences than U2 so far in 2008.) Yet the ad's real delight is found in the copy below the picture. Does anybody remember Bono being nicknamed "The Green Tornado," or the Edge being known as "the man of a thousand guitars"?

"There was this really embarrassing line of promotion on our very first album," Bono told BBC, erroneously, in 1992. "When we arrived in America and we were feeling pretty cool...for about a minute. And (laughs) they described The Edge as 'a man of a thousand guitars.' They thought this was very exciting."

"It was ironic," revealed The Edge, "since I had only one guitar at the time."

"I wasn't gonna bring that up," replied Bono, so embarrassed, he surely conceived his Mephisto alter-ego later that day.

From this fall's two-CD reissue of October: