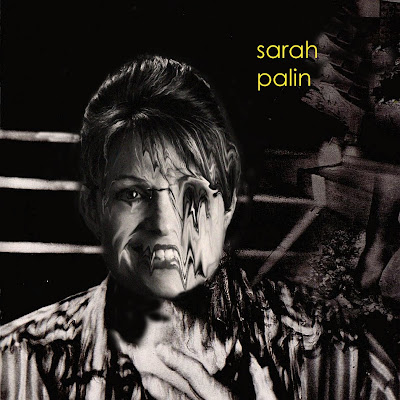 Just a guess, but I suspect Sen. John McCain ain't big into rock music. That's OK, rock music ain't big into him, either. No wonder, then, the GOP's presidential candidate and his running mate are having a dickens of a time finding a rallying anthem for their campaign.

To date, John Mellencamp, Jackson Browne, The Foo Fighters and Heart have all asked the McCain-Sarah Palin ticket to stop using their songs. Browne even launched a lawsuit over the use of Running on Empty in a McCain TV spot, although you'll notice those truth-in-advertising watchdog groups didn't say peep about it. ("Running on Empty? Yup, that pretty much sounds right. Next...")

I may not be allowed to vote in the U.S. election, being a Canadian and all, but I'd like to contribute to the process in some small but meaningful way. So, today, Bongo Jazz would like to suggest the ideal anthem for the McCain-Palin ticket. Admittedly, the song wasn't a big hit, like Pink Houses or Barracuda or My Hero, but it chimes with an emerging theme of the McCain-Palin campaign: be suspicious, even afraid, of those people who are not exactly like you.

Palin may become tongue-tied when asked difficult, 'gotcha' questions like, "What newspapers do you read?" — damn that liberal media — but she was articulate and at-ease spreading xenophobic disinformation (how Christian of her!) by telling crowds last week that Barack Obama "palled around" with terrorists and that he "doesn't see America as you and I do." Meanwhile, Time magazine reports McCain volunteers are being encouraged to accuse Obama of being a terrorist, of being a secret Muslim, of refusing to salute the flag, of hiding where he was actually born. And some sheep ... er, value voters are believing this nonsense (see video below ... and get really depressed), pointing to what they consider irrefutable evidence: Obama's name sounds kinda threatening, especially the Hussein part. His skin isn't middle-America white. His family tree has roots around the world. And these McCain-Palin supporters are reacting exactly how you'd expect folks who respect the sanctity of life would: By shouting "kill him," and "off with his head," in reference to Obama, during GOP rallies.

Now imagine how energized this base would become if McCain-Palin adopted today's post, from Peter Gabriel's third solo album, as their official campaign song. Its chorus — "Not one of us/Not one of us/Oh no, not one of us" — boils down the intellectual complexity and philosophical nuance of the GOP's key campaign plank into just six words ... so few, even McCain-Palin supporters could memorize them all before election time. Republican strategists will nod their heads in agreement to the line, "There's safety in numbers when you learn to divide." And everyone who believes 'foreign' is a synonym for anti-American will surely chant "USA! USA!" after the lyric: "A foreign body/And a foreign mind/Never welcome in the land of the blind." (Blind, in this context, is not an insult. Travel and book-learning opens the eyes and makes you an elitist, don't you know.)

Of course, Gabriel is rebuking, not endorsing, xenophobic impulses, although methinks some of the people who now suspect Obama masterminded the 9/11 attacks might not be gittin' the rest of his lyrics.

Since Friday, McCain has tried to tone down the 'who is the real Barack-Obama' rhetoric at his town halls meetings but, sadly, the genie is now out of the bottle. The war hero is being heartily booed by his own supporters for stating the simple truth that Obama is "a decent family man." McCain and his handlers are fools if they expected any other reaction from their reconcilatory about-turn. I am reminded of a line in Bruce Cockburn's The Trouble With Normal: "What did they think the politics of panic would invite?

Not One of Us (link expired)