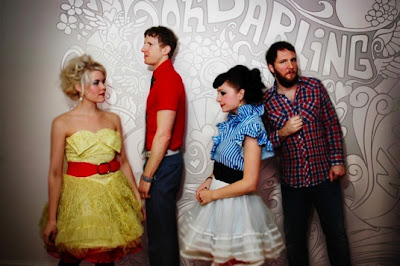 For some people, cute is a four-letter word. Um, maybe I need to rephrase that. Let's just say, I can understand why certain folks wouldn't fall for the considerable charms of Portland's Oh Darling. For starters, the illustration on the cover of debut CD, Nice Nice (pictured below), is filled with more hearts and flowers than you'll find in a diary of some lovestruck Grade 8 girl. Pry the CD out of the jewel case and you'll see a hidden message: "we heart you." (Awwwww!) And then there's lead singer Jasmine Ash, whose little-girl vocals make Lisa Loeb sound like Tom Waits ... after a weekend-long, Drano-swigging bender. So, yes, there are some aspects to Oh Darling that are so precious, I wouldn't be surprised if fuzzy kittens and Gerber babies worldwide launch a class-action lawsuit charging copyright infringement. 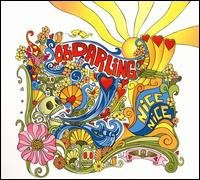 However, if the above observations don't spark an uncontrollable urge to blast a Black Mountain CD, then perhaps you should give this two-boy, two-girl outfit a listen. You'll quickly notice Oh Darling aren't as cute as first impressions suggest. Ash's high, twee voice hardly prepares you for a withering putdown like, "I'd love you if I could/But just enough to fake it." The band's effortlessly melodic, hook-laden originals aren't dainty but muscular and agile, often recalling the springy, fizzy indie-pop of The Breeders. Meanwhile, if Ash's vocals are the first thing you notice about Oh Darling, her keyboard work slowly reveals itself as one of the band's most pleasing features. Today's post is an excellent example of this: The best part of this track is not its naggingly infectious chorus but the instrumental passage that follows, where Ash's synth swirls around Daven Hall's ascending, heavily treated guitar — a la The Cars' Greg Hawkes and Elliot Easton — to achieve a thrilling, 'we have liftoff' moment.

(Hey, do I see human skulls amid all the hearts and flowers on the cover?)

Here's a video for another Nice Nice standout, Against the Skyline, which contains that forementioned 'fake it' lyric: