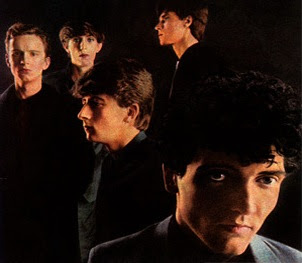 Cowboys International: Terry Chimes, far left
Sometimes one blog post begats another. While I was writing last weekend about Topper Headon's 1986 solo album Waking Up, I felt compelled to devote some words to the post-Clash career of the band's other significant drummer, Terry Chimes. He played on the Clash's incendiary 1977 debut (credited as Tory Crimes), left soon thereafter, only to return to the fold in May 1982 following Headon's firing. Between those two stints, Chimes sat in with Johnny Thunders's Heartbreakers and Generation X, but more significantly, he was a member of the short-lived Cowboys International.

Chimes didn't simply join a gang of Clash wannabes. Fronted by vocalist-composer Ken Lockie, Cowboys International specialized in propulsive, highly stylized synth-rock that, like many new wave bands of the era, was heavily influenced by Bowie, Roxy and Eno. If Lockie and Co. were trying to predict what '80s pop would sound like, give 'em credit: they were on the right path. (One suspects the nascent Psychedelic Furs were listening and taking notes.)

Today's posts come from the quintet's 1979 debut, The Original Sin. Here Comes A Saturday was the languid, glacial single, while Chimes drums the hell out of the album's closing track, the whirlpooling Wish, which also features a guest turn from Public Image Limited guitarist Keith Levene (also another Clash alumnus).

Alas, this Cowboys International lineup was disassembled about six months after The Original Sin's release and Lockie toured the record with an almost entirely different group of musicians. He released a solo disc, The Impossible, in 1981 before briefly joining PiL as a keyboardist. In 2003, he reissued The Original Sin as Revisited and, a year later, recorded a new Cowboys International album, The Backwards Life of Romeo.

Chimes, as previously mentioned, rejoined the Clash in 1982 and can be heard pounding the skins on the group's recently released concert set, Live at Shea Stadium. Chimes and The Clash parted company again in 1983; the drummer joining Hanoi Rocks and later Black Sabbath, before pursuing his current career as a chiropractor.