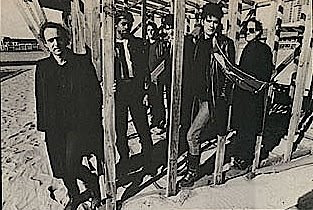 With that provocative couplet and 43 others just like it, no wonder 88 Lines About 44 Women became a calling card for The Nails, a New York-via-Boulder rock sextet that's also remembered for, frankly, not much else. Shame, that: They've released some fine records and one great one, the self-produced and independently released Hotel For Women EP, which contained the original version of 88 Lines (far superior to the 1984 re-recording for RCA). At the time, I thought 88 Lines was a clever novelty song, good for a snigger, but hardly the best track on the EP (pictured below). That honour belonged to the title track, a pulsating ska number with a cool dub breakdown that transported listeners to the seediest, most soul-sapping strip club in town. Twenty seven years later, I still think it's a better song than 88 Lines. 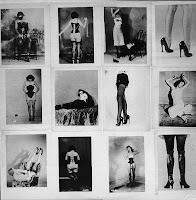 Hotel For Women is an oddity in the Nails' canon in that it's sung by a woman, Connie Garcia, who provided backing vocals for the group's early recordings. Her blank, detached delivery is perfect as she sings of life as a topless go-go dancer — "life is a factory/grinding out misery/living anonymously" — and her humble sanctuary, a hotel for women with "clean sheets and colour TV." The Nails surround Garcia's ennui with sax, Farfisa and melodica riding a humid, sticky groove, all drenched in delicious reverb. More than a few Two Tone bands would have traded in their pork-pie hats for a song this good.

Alas, by the time The Nails signed to RCA and recorded their major-label debut, 1984's Mood Swing, the reggae/ska/dub influences were gone, replaced by a more commercial (but still gritty) R&B sound. Long unavailable, Mood Swing was finally reissued last year, along with its tepid followup, 1986's Dangerous Dreams. Sadly, neither disc was appended with the Hotel For Women tracks which, aside from the original 88 Lines, remain unreleased on CD.

Despite being recognized an '80s classic, 88 Lines About 44 Women received scant mainstream airplay back in tha day. No promotional clip was made for 88 Lines; instead, RCA spent its money making a video for Mood Swing's one non-original, a spirited cover of The Hombres' Let It All Hang Out. MTV actually aired the video quite frequently (back when MTV actually played videos); this, and not 88 Lines, is the closest The Nails came to having a bona-fide hit.