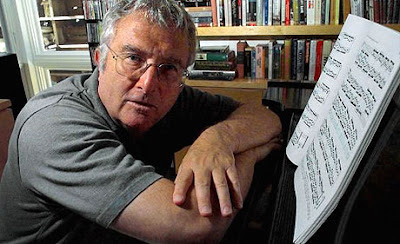 Randy Newman must have known he was skating on thin ice when he lampooned certain aging rock stars in I'm Dead (But I Don't Know It). "Everything I write all sounds the same/ Each record that I'm making/ Is like a record I've made/ Just not as good," he sings over a backdrop of mockingly cranky electric guitar. The song could have been ridiculing any number of classic-rock survivors whose best-before dates had long passed yet Newman, then 55, avoided self-incrimination by ensuring its parent album, 1999's Bad Love, was among his best ever.

Harps and Angels, the long-awaited followup to Bad Love, arrives in stores Tuesday. I haven't heard it yet but the advance buzz has been uniformly positive. No surprise there: now 40 years into his recording career, Newman only makes a new pop platter when he has the goods and, as such, Harps and Angels is his third disc of new material (excluding soundtrack work) in 20 years. Quality trumps quantity, then, as it always should. 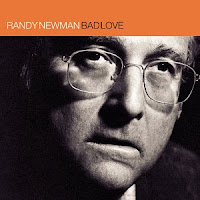 Today's post is my favourite cut off Bad Love, another first-person lyric set to a New Orleans shuffle in which Newman's aging sugar daddy interrogates his sweet young thing to find out why she has been avoiding him. Of course, he already knows the answer: "A man of my experience of life/ Don't expect a beautiful young girl like yourself/ To come on over here every day/ And have some old dude banging on her like a gypsy on a tambourine."

As the song proceeds, he becomes increasingly agitated and aggressive, occasionally with side-splitting results. "You know what it feels like to get up in the middle of the night and sit down to take a piss? You do know? So you say," he rants, mouth now operating independently of brain. Then Newman does something I've never heard in a pop record: he shouts down the background singers, ordering them to shut up. Before the song spirals out of control and his character turns into caricature, Newman dials down the intensity and closes the track on an unexpectedly sweet and vulnerable note.

Shame is the work of a master songwriter whose best work could still be ahead of him. Tuesday can't arrive fast enough.

For more Bad Love goodness, here's Newman performing the forementioned I'm Dead (But I Don't Know It) in Stuttgart, Germany, in 2006:

The title track is as good as anything he's ever done, and believe me, I hold him in as high esteem as you do.

All this time goes by between albums, and I mentally and subconsciously move him off of my all time greats list (that also includes Waits, Richard Thompson, Van Morrison, and very very few others), then he does something like this, and moves back in.

What a bluesy soulful piece of music. wow. I hope you agree.

Hey, Brad, thanks for your comment -- I didn't have a chance to pick up the album today and now I'm really regretting that. "As good as anything he's ever done"? High praise, indeed, but I don't doubt it...