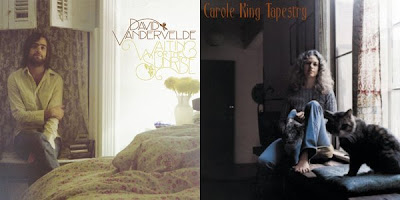 Sometimes, you can tell a book — or a record — by its cover.

Waiting for the Sunrise, the recently released second album from David Vandervelde, pictures the singer-songwriter long-haired and bearded, looking like a young Kenny Loggins, sitting by the window of a room whose curtains and flowery bedspread likely have been unchanged since the Nixon administration. Put a cat somewhere in the foreground, staring down the photographer, and you'd almost have Carole King's Tapestry. (Gee, 2008 Vandervelde and 1971 King would have made a lovely couple, don't you think?)

Sunrise's cover gives you ample clue to the contents: Gone are the fizzy, electronically enhanced homages to Marc Bolan that populated Vandervelde's full-length debut, The Moonstation House Band; say hello to a warmly recorded approximation of early-'70s, Laurel Canyon rock, with soft- and country- modifiers, that owes more than a little debt to Neil Young's work with both Crazy Horse and CSN (and, as such, also echoes contemporary acts with similar influences, especially The Jayhawks and The Thrills). Derivative? Sure. But who cares when the new songs are instantly memorable and handsomely adorned in Hammond organ, pedal steel and multi-part vocal harmonies. The only way I could like this album more is by hearing it on a nice, thick slab of vinyl as the scent of patchouli oil fills the room.

Old Turns is my early favourite: a mid-tempo, taking-stock number with great harmonies; a surging, ascending chorus; and lyrics that suggest why the longtime Chicago and Brooklyn resident upped stakes and relocated to Nashville: "All the places I've been through/They don't compare to/All the beauty I've found/Shining through Mother Nature/All the money in this world/It cannot buy you a clearer mind."

Old Turns is worth the price of admission alone but I Will Be Fine, California Breezes and Cryin' Like The Rain are every bit its equal, making me wonder why Sunrise has received so many lukewarm reviews from fans who preferred his previous musical direction. Personally, I like acts that throw curveballs once in a while and, after all, anyone who pays attention to Sunrise's cover art can't claim they weren't warned.