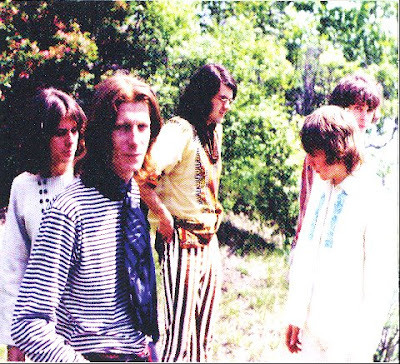 The history of pop music is chock full of unlikely alliances and odd partnerships. Like when Frank Zappa started hanging out with The Monkees. Or when Aimee Mann harmonized with Geddy Lee. Or when jazz legend Miles Davis played on a crap Toto album. And who can forget Garth Brooks's contributions to the sessions that produced Chris Gaines's immortal debut album? Today's post is another left-field head-scratcher: A single from short-lived Toronto psych outfit Kensington Market, co-written by the guy who produced Cream's signature classic Sunshine of Your Love and the fellow who produced Rough Trade's new wavy, girl-on-girl fantasy High School Confidential. Well, you know what they say about truth being stranger than fiction.... 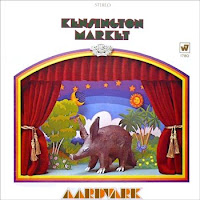 I suppose a few details are in order. Help Me is the leadoff track and first single from Kensington Market's sophomore disc-turned-swansong, Aardvark, released in May 1969. (More on that title later.) The six-piece was managed by Bernie Finkelstein and featured in its ranks guitarist-pianist Gene Martynec, who penned Help Me with Felix Pappalardi, the producer of Aardvark and its predecessor Avenue Road. New Yorker Pappalardi was riding high in '69, having helmed a trio of Cream albums (Disraeli Gears, Wheels of Fire and Goodbye) and founding proto-metal band Mountain with Leslie West.

However, Help Me echoes neither Cream nor Mountain. The song's striking intro doesn't even sound like a 1969 psych track; rather, it starts like a 1980 electro-pop record ... played at 16 r.p.m. (Credit new member John Mills-Cockell, whose singular Moog and synth work colours many of Aardvark's 13 tracks.) When the band joins in, they build upon the intro's wobbly, slo-mo rhythm and woozy vibe; the end result could be mistaken for late-period Flaming Lips ... yet The Soft Bulletin was still 30 years away.

Alas, Kensington Market's prodigious consumption of hallucinogens took a toll on intraband relations and, before the year was up, the group had disintegrated. Undeterred, Finkelstein established True North Records in early 1970 and, over the ensuing three-plus decades, many of the label's acts (including Bruce Cockburn, Murray McLauchlan and Rough Trade) were managed by Finkelstein and produced by Martynec. As for Pappalardi, he found steady work as a producer until the late-'70s when hearing loss forced him to retire. He was shot and killed by his wife in their Manhattan apartment in April of 1983.

And, finally, why name an album Aardvark? Apparently, the band was pleased to see debut Avenue Road listed near the top of the Warner Bros. catalogue and, as you'd expect from any self-respecting psych band, Kensington Market was determined to get higher.

The surviving members of Kensington Market reunited last June at Hugh's Room in Toronto to perform a show celebrating the re-release of Avenue Road and Aardvark. Here they are performing Avenue Road single, I Would Be The One: