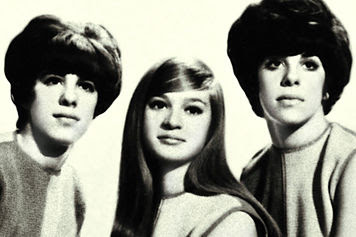 You never get a second chance to make a good first impression. There's a lot of truth in that hoary cliche. So remember: if you can't make that good first impression, consider stealing ... er, borrowing one from someone else. Musicians do it all the time and, in today's post, I present a couple of notable examples of great songs that were built with used parts. 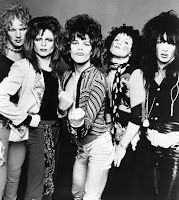 "When I say I'm in love, you best believe I'm in love — L-U-V!" declares David Johansen at the beginning of Looking For A Kiss, the second track off the New York Dolls' classic 1973 self-titled debut album. It's is an awesome opening gambit, dripping with style and attitude, but it's not theirs: the Dolls pilfered it from Give Him a Great Big Kiss, recorded eight years prior by legendary girl group, The Shangri-Las.

The Dolls did not give Great Big Kiss composer George 'Shadow' Morton a songwriting credit on Looking For a Kiss; they did, however, hire him to produce their 1974 followup album Too Much Too Soon. Meanwhile, the Dolls' own version of Great Big Kiss, recorded before making their debut, surfaced on the 1992 demos compilation Seven Day Weekend, while guitarist Johnny Thunders continued to include it in his sets with the Heartbreakers following the Dolls' breakup:

The two songs are complementary: On Great Big Kiss, Mary Weiss tells her fellow Shangri-Las about the cool-as-fuck bad boy she's now seeing. ("He's good bad but he's not evil," she assures.) Looking for a Kiss seems designed as a sequel: eight years later, Weiss's bad boy is a New York Doll, he's screwing around and he's telling everyone he's looking for a great big kiss, too, but not from her.

And you thought Leader of the Pack ended tragically.

Give Him a Great Big Kiss (link expired)

Looking for a Kiss (link expired) 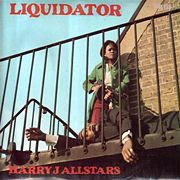 Next up: The Staple Singers' 1972 chart-topper I'll Take You There, written and produced by Alvertis Isbell, better known as Stax executive Al Bell.

A perfect marriage of soul and reggae, this is simply one of the greatest pop songs ever recorded. Next to Mavis Staples's sensuous vocal performance, the track's most distinctive features are its slinky rhythm and bassline intro, both lifted from The Liquidator, a 1969 reggae instrumental written by Jamaican producer Harry Johnson and recorded by his session band, The Harry J Allstars.

Bell travelled to Jamaica regularly and surely heard The Liquidator during his many visits there; besides, it was also a top-10 smash in the UK. Yet I'll Take You There sports his sole songwriting credit. This has been disputed — not by Johnson but by Staples, who insists she and Bell collaborated on the song's lyrics in her Chicago apartment. David Hood, who played bass on the track, says he and drummer Roger Hawkins also deserve some authorship. "I feel like we all co-wrote it because there was no I'll Take You There until we cut this track," Hood has said. "The idea for that was kind of out of the air."

Out of the air? You decide.

I'll Take You There (link expired)

And, from 1972, here are the Staple Singers performing I'll Take You There on The Flip Wilson show:

When I first heard "The Liquidator", I assumed that they were quoting the intro to "I'll Take You There". I didn't realize that it was the other way around!