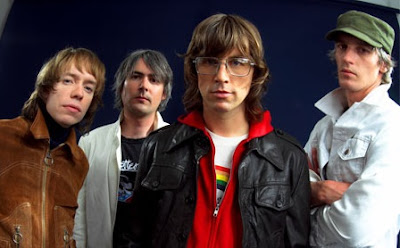 This might make me sound like an old fuddy-duddy but I miss the days when the charts were populated with pop bands that contained multiple, accomplished singer-songwriters, each with a distinct style that nevertheless complemented the others. Oh, the fun one could have debating the individual merits of Lennon, McCartney and Harrison; McGuinn, Clark, Crosby and Hillman; Buckingham, Nicks and McVie; Stanley, Simmons, Frehley and Criss; and, of course, Woloschuk, Long and Draper. (It's my blog and I'll drop a gratituous Klaatu reference anytime I damn well want!) 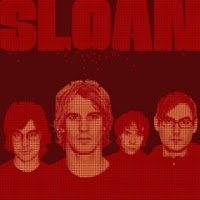 A few of these multi-headed monsters still exist. In Canada, there's Sloan, a criminally underappreciated pop-rock quartet whose albums feature songwriting contributions from all four members. Yet if I were forced to carry a lunchpail adorned with a picture of my favourite Sloan member, I'd be spending my noon hours with Jay Ferguson.

Over the course of nine studio albums, Ferguson's contributions invariably wind up my favourites: breezily melodic, pure-pop confections such as The Lines You Amend (from 1996's One Chord to Another) and C'mon C'mon (from 1998's Navy Blues) zero in on the same aural pleasure centres that render me weak-kneed whenever I hear Runt-era Todd Rundgren, Badfinger, Emitt Rhodes and The Ballad of John and Yoko.

Today's post is, for my money, the best track on Sloan's fine new album Parallel Play and as good a song as anything Ferguson has done with the band. Clanking piano chords and a ba-ba-da refrain lead us right into the Cheap Champagne's bubbly chorus (sorry, couldn't resist) and, by the 20-second mark, you should be under the song's pop-tastic spell. And after the first verse, you'll be pleasantly surprised to learn the lyric is as sour as the melody's sweet. "When I look into her eyes," Ferguson sings, "y'know it never meant that much to me."

Cheap Champagne's key components — piano, strummed acoustic guitar, overdubbed close harmonies and simple, Macca-style drumming — ensure the track stands out among the album's many moments of electrified riffola. Yet Sloan remains the best vehicle for Ferguson's songs, as I can only imagine a solo disc containing 12 variations of the same theme would prove underwhelming.

Sloan's music remains greater than the sum of its parts, not unlike the Beatles, the Byrds, Fleetwood Mac and, er, Klaatu.

Here's the video for the forementioned Ferguson gem, The Lines You Amend. Dig its cool Ringo reference: