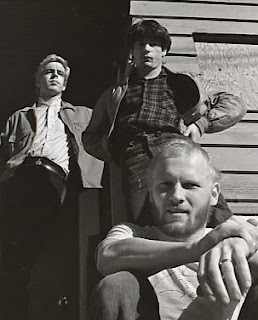 Today is Canada Day in my neck of the woods; it's kind of like Independence Day in the U.S. minus the fervent patriotism and all that didn't-we- kick-some-Brit-ass bravado. Canada Day is time for all Canadians to stand tall, hold our heads high and declare to a waiting world: "Hey, man, we're really sorry for Nickelback. No, seriously, that was really bad. Can I buy you a doughnut?"

In honour of Canada Day, here's a genuine Canuck punk-rock classic that's surely well known to my compatriot readers but likely unfamiliar to all you nice folks in other parts of the world.

Hawaii is the title track of a four-song EP by The Young Canadians (formerly The K-Tels), a Vancouver-based trio led by singer-songwriter Art Bergmann. It was recorded in September 1979 and co-produced by Bob Rock, guitarist with fellow Vancouver underground scenesters The Payola$ and future knob-twiddler to countless heavy metal stars. 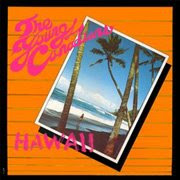 Punk, of course, can be a nebulous term and, in this case, Hawaii is ultimately a high-octane version of California surf rock, no more hardcore than the first two Boomtown Rats albums but hooky as hell. That said, the enduring appeal of Hawaii is Bergmann's delicious sneer and his recurring use of the F-word as an adjective to describe possible sunny vacation destinations where he can escape the West Coast rain; places like f---ing Hawaii and f---ing Tahiti and f---ing Miami. Strangely, mainstream radio didn't spin this record much at all. Too bad: Even a few well-placed bleeps wouldn't spoil Hawaii's irrepressible energy and mischievous spirit.

The Young Canadians would release another four-track EP, This Is Your Life, before playing their last show on Dec. 13, 1980. (Zulu Records gathered the group's studio recordings and some live tracks on 1995's No Escape compilation.) Bergmann fronted a couple other independent groups — Los Popularos and Poisoned — then released a series of fine solo discs, starting with the John Cale-produced Crawl With Me in 1988. Sadly, he hasn't released an album of all-new material in 13 years; last I heard, he was living on a farm outside a small Alberta town. You might have heard of the place. F---ing Airdrie.

Here's Bergmann, with the Young Canadians, playing This Is Your Life track Data Redux on Vancouver TV in 1980.