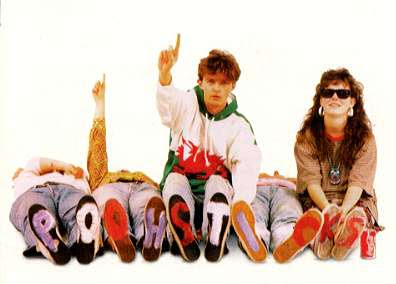 I recently read a magazine article that claimed the music we love in our early teens gets hot-wired into the pleasure centres of the brain and will trigger feelings of happiness for the rest of our lives. Gawd, I really hope that's true because this theory justifies my otherwise inexplicable affection for Reunion's Life is a Rock (But The Radio Rolled Me) and countless other bubblegum hits of the 1970s. Naturally, I'm also a sucker for songs that evoke this era, such as today's post from producer/songwriter Steve Gregory and vocalist Hue Williams, the core members of Swansea pop conceptualists The Pooh Sticks.

To be entirely honest, these two indie smart-alecks evoked the era because they shamelessly pilfered from it, mixing and matching existing melodies, lyrics, solos, even song titles. (1991's Great White Wonder, for instance, contained such Pooh Sticks 'originals' as Desperado, I'm in You, Sweet Baby James and The Wild One Forever, titles more commonly associated with The Eagles, Peter Frampton, James Taylor and Tom Petty, respectively.)

That Was The Greatest Song — the closing track on the Pooh Sticks' penultimate album, 1993's Million Seller — is also made from used parts: its sunny chorus lifted (with appropriate credit) from the 1979 single Greatest Song by long-forgotten UK rock band Freeway. Williams wrote the rest, including the charming faux-naif lyric that quotes Pete Wingfield's 1975 single Eighteen With a Bullet and equates the thrill of a first kiss with the joy of hearing a perfect pop song. What self-respecting music fan would dare argue with a sentiment like that? Best of all, That Was The Greatest Song approaches pop perfection itself; it would have fit snugly between The Raspberries and Badfinger on an early-'70s AM playlist.

That Was The Greatest Song (link expired)

Cool. I think you'll find it was Steve who did all the songwriting. Have you heard his latest? http://www.littlehits.com/blog/?cat=8

I mentioned Williams wrote the rest because that's what the liner notes claim. Of course, these are the Pooh Sticks so they may say Hue wrote the rest but, really who knows. Thanks for reading, John!

I always liked this one. I think Freeway might've been American. If they weren't they should've been.