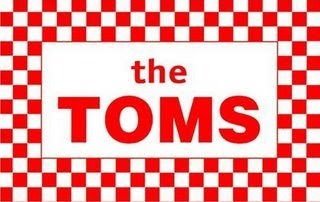 Now I'm no mathematician but I suspect the chances of creating a genuine power-pop classic are rather slim. So what would be the likelihood, then, of creating a power-pop classic and earning a Grammy Award nomination for work on Saturday Night Fever's crap sequel Stayin' Alive and collaborating with Richie Sambora on the Bon Jovi guitarist's first solo album? Pretty effin remote ... statistically speaking, of course.

Meet Tommy Marolda, the New Jerseyite who has defied these astronomical odds (which could explain why he now resides in Las Vegas).

His CV is a long one; the byproduct of a fruitful 30-year career spent running his own studio; contributing music to TV shows and film; and writing for and producing other acts. Yet Marolda might be best known and best loved trading as The Toms, a one-man band whose 1979 self-titled debut is rightfully hailed as a power-pop classic — and it doesn't even include Sun, arguably his finest three-and-a-half minutes.

Today's post surfaced three years ago on Yellow Pills: Prefill Numero 004, a two-CD compilation of late-'70s, early-'80s power-pop. Alas, the liner notes don't indicate Sun's recording date or session info and even Marolda's own website sheds no light on this amazing track. (Anyone with these details is encouraged to leave them in the comments.)

But here's what I do know. Fuzzy guitar squall and metronomic 4/4 snare beat sets Sun in motion and, if this sounds a little Sonic Youth in theory, in practice it's pure pop nirvana. On the chorus, Marolda plays a nagging riff on the bells and adds Space Invader-like sound effects and multitracked vocal harmonies, all nicely phased for slight psychedelic effect. "I'm waiting for the rain to end/Watch a whole new day begin," he sings and, indeed, the sound of Sun evokes beams of light breaking through the murk. That said, I'm still uncertain if Sun is a song of unabashed optimism or if its pockets of turbulence and recurring refrain of "darkness comes and darkness goes away now" make this The Catchiest Song about Bipolar Disorder ... Ever!

If you like Sun, check out that 1979 debut and, according to Marolda's website, more Toms titles are coming to iTunes soon.

For a sample of his work outside of The Toms, here's the video for Ballad of Youth, the first single from Sambora's 1991 solo album Stranger in this Town, co-written by Sambora and Marolda:

I don't know anything about the Toms (or didn't before I read your post), but I recognized the LP cover from the Bomp book. Greg Shaw began his review, "Not since I opened the mail one day and found 'Black Vinyl Shoes' have I had such a strong feeling being in the presence of an important new talent." Greg compared Tom to Todd Rundgren, as well as the Raspberries and Badfinger. That's some high power pop praise!

I wouldn't disagree with the late, great Greg Shaw. I think Badfinger is a bit of a stretch but the Raspberries are an excellent point of reference. The self-titled Toms debut is a great record; if you liked Sun, I recommend Toms with utmost confidence. Thanks for reading!

I will check out more of the Toms. Thanks for the recommendation, and for linking to my blog! I have added a link from mine to yours as well.

The song was an unused track from the "Simplicity" album...