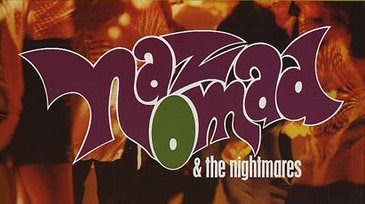 Multiple personality disorder is not necessarily a bad thing— at least, when it afflicts a rock and roll band. Green Day, for instance, is currently sidestepping that whole 'how-do-we-follow-up-a-blockbuster?' dilemma by trading as Foxboro Hot Tubs and cranking out '60s-style garage rock, with a sprinkling of power-pop, on their derivative but highly entertaining 'debut' album, Stop Drop and Roll!!!

It is a savvy move on Green Day's part but they're simply following in the footsteps of several other bands that have sought fresh inspiration by adopting a different name and musical direction, typically one that's near and dear to their collective hearts.

XTC resuscitated their commercial and artistic fortunes in the mid-'80s after recording as their psychedelic alter-egos, the Dukes of Stratosphear.

A little before that, British punk band The Damned dove headfirst into the Nuggets and Pebbles songbooks under the awesomely alliterate band name: Naz Nomad and the Nightmares.

Their one and only album, Give Daddy The Knife, Cindy, contained mostly covers (unlike Foxboro and the Dukes) but original Damned members Dave Vanian (as Naz), Rat Scabies (as Nick Detroit) and Captain Sensible (as Sphinx Svenson) absolutely nail the energy, excitement and crude stereophonic panning of the source material.

And what great source material: The Wind Blows Your Hair (The Seeds), The Trip (Kim Fowley), I Can Only Give You Everything (Them), I Had Too Much To Dream Last Night (Electric Prunes), Kicks (Paul Revere and the Raiders), Action Woman (The Litter) — and today's post, a hyperactive version of the Human Beinz's Nobody With Me, complete with overdubbed party noise, swirling farfisa organ, handclaps and all the vocals blaring out of the right channel (because, as the album jacket points out, this music was recorded in "full 3D stereo.")

Give Daddy The Knife, Cindy is one of the Damned's finest moments even though the band isn't credited anywhere on the album — jokingly billed as the soundtrack to a (fictional) 1967 American Screen Destiny picture. But the real punchline? While many official Damned titles have long been deleted, Naz Nomad and the Nightmares' one and only record remains in print.

Nobody But Me (link expired)

And, for more multiple-personality fun, here are the forementioned Dukes of Stratosphear, looking like XTC frolicking in Sgt. Pepper's puppet playground, in You're A Good Man, Albert Brown:

it is a great album but i only know of 1 godawful damned album from 1986 (anything) that's been deleted, the rest are in print and, aside from this ill advised foray into 80's pop/rock, are great albums and easily available along with a plethora of compilations and live albums, many of which include forays into naz nomad territory (Covers of Alone Again Or, Looking At You, Magic Potion, Too Much To Dream and many more). thought you might want to know
A.J

Actually, I bought this off amazon just a month or two ago.

It's in my Ipod rotation.