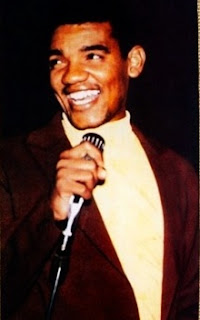 Summer's officially here (at least on my half of the world) and, to my ears, there are few songs as summery as Nem Vem Que Nao Tem. Today's post radiates unabashed, carefree joy, a quality that belies both the political backdrop of its creation and the tragic fate of its artist.

Brazil's Wilson Simonal was a hugely popular nightclub performer during the 1960s. His sound fused samba with American soul and swing, a style that would become known as pilantragem (which, depending on the translation, means 'piracy' or 'mischief'.) People loved it — loved him — and the Rio native sold a ton of records, hosted his own TV program, drove expensive foreign automobiles and dated a bevy of attractive blondes. No wonder the pilantragem classic Nem Vem Que Nao Tem sounds like the work of a man who's on top of the world. In 1967, Simonal was.

The song — from the album Alegria, Alegria!!! (below left) — starts with a burst of Simonal laughter, party sounds and handclaps (as many of his songs did during this era). 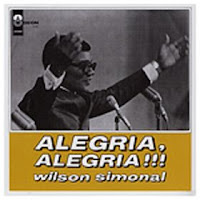 Soon, it settles into a hip, fingerpoppin' groove, highlighted by some slinky guitar, jazzy piano tinkling and Simonal's playful, mischievous vocal. Nem Vem Que Nao Tem is so celebratory and life-affirming, you almost forget, at the time, Brazil was in the fourth year of a brutal, right-wing military dictatorship that would endure 17 more.

Alas, mischief — and not the musical kind — led to to his downfall. In 1971, Simonal suspected his bookkeeper was embezzling from him and called upon his friends within the police arm of the military government to kidnap the accountant and get a confession out of him. Bad move. The accountant was eventually released, sued Simonal for extortion and, during the subsequent trial, an army general claimed Simonal was a government informant, hired to spy on his fellow musicians. Once loved, Simonal was now a pariah. Naturally, his fellow artists wanted nothing to do with him, and he was banned from record companies, radio, TV and record stories. His career took a sharp downturn from which it never fully recovered.

Simonal died from cirrhosis eight years ago this week. According to friends, Simonal, on his deathbed, remained hurt by the accusation he was an informant for the military government.

Since then, his widow has accessed documents listing the former government's many informants.

From 1970, here's some fabulous footage of Simonal sharing the stage U.S. jazz great Sarah Vaughan, who appears to succumb to Simonal's easy-going charms.