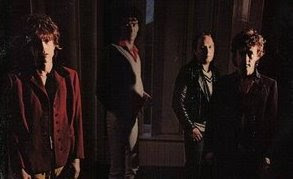 How do you follow up a pop music classic like The Only Ones' 1978 single Another Girl, Another Planet? The simple answer is you don't. Songs like that come once in a career, if you're lucky. Nevertheless, the short, turbulent career of The Only Ones (1977-81) left a body of work that only the foolish would describe as 'the hit and the other stuff.' Even in 1980, as his band was unravelling and his drug addictions spiralled out of control, frontman-songwriter Peter Perrett still managed to write well-observed, acid-tongued songs like today's post.

Perrett penned this for his ex-girlfriend who, in a perverse way, must have been flattered to inspire something this bilious and mean-spirited ... and succinct. "Why don't you kill yourself/You ain't no use to no one else," Perrett sings in a chorus that boils down everything he needs to say in a tidy, memorable couplet. That said, his other lyrics are pretty good too: Surely, this is the only song with a middle-eight that tabulates how many times a girl had her stomach pumped.

Perrett seemingly savours the malicious intent of every word; the song's sentiment nicely complemented by Perry's stinging guitar work, especially on the outro.

Of course, it's no Another Girl, Another Planet.

Then again, what is?

Why Don't You Kill Yourself (link expired)

All four original members of The Only Ones (Perrett, guitarist John Perry, bassist Alan Mair, drummer Mike Kellie) reunited in 2007 for a short UK tour with more dates planned this year.

Here they are performing Another Girl, Another Planet (top video) and a new song, Black Operations, last month on Later ... With Jools Holland: