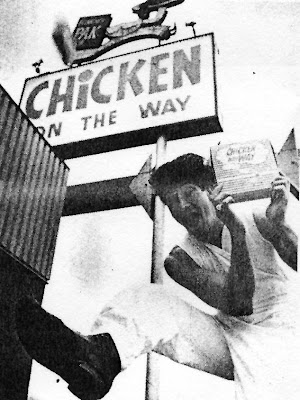 Dis darn interwebs thingie is pretty cool ... for being a series of tubes, that is. (Big shout out to U.S. Senator Ted Stevens for teaching me everything I know about modern technology!) The other day, I was browsing recent visitors to Bongo Jazz and noticed some of these pages were viewed by a reader from Vladivostok, Russia. I was thrilled and knew it was time to blog about my Canadian hometown's long-gone, garage-rock heroes, The Golden Calgarians, and their song Vladivostok Rock.

Led by a charismatic big-mouth simply named Bruno (pictured above), the group was arguably the most popular local act in the city's underground rock scene during the 1980s. They gigged incessantly, in Calgary and across Canada, and self-released several singles and two full-length albums. The first, 1981's It's Fun To Be Alive, captured a young band trying on ill-fitting new wave duds but 1984's Savage Love was much better: primal, pulse-quickening garage-rock that combined cartoonish humour, carnal obsession and era-defining Cold War paranoia. 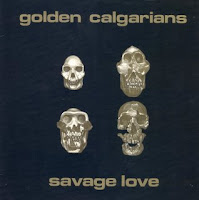 Vladivostok Rock is the record's Nuggets-worthy opening salvo. Guitarist Doug Smith sprays fuzz-guitar goodness all over bassist Dave Degrood and drummer Jeff Smith's lurching, caveman beat, while Bruno's knowingly silly lyrics take a typical rock band fantasy and adds a nuclear-nightmare twist: "We were hired by the CIA/ To rock and roll for Destiny Day/We were rockin' for the KGB/We didn't want to but it had to be... Doin' it like we learned/Playing rock and roll till the world got burned."

Sadly, the Golden Calgarians never drew much, if any, interest from the Canadian music industry. They never had a hit, although their ode to Calgary fast-food institution, Chicken on the Way, was a local campus-radio perennial in the day. They never reunited and their music has never been reissued on CD, or found a second generation of fans. But maybe, just maybe, in a world where interwebs tubes link us all, where somebody in the former Soviet Union can visit a blog from the prairies of Canada, the Golden Calgarians might enjoy a unique bit posthumous exposure they never could have imagined 24 years ago: Someone in Vladivostok downloading Vladivostok Rock and possibly allowing the sound of Bruno's voice and Smith's guitar to waft through the Russian night.

wow that's really bad
got any penguins on broadway?

No Penguins on Broadway -- that's a name I had forgotten. Vladivostok Rock "really bad"? All depends on how you like to spend three minutes, I guess. I'd slot that track in a Nuggets mix any day...

I remember seeing them fellers at the old Calgarian Hotel.