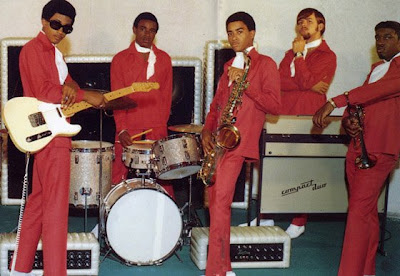 Plagiarism is rarely so shameless and blatant than when artists 'borrow' from their own back catalogue. Think Baby Talks Dirty, The Knack's rewrite of My Sharona. Think Nickelback's entire career. And, of course, think Fantasy Records suing John Fogerty for plagiarizing his CCR hit Run Through The Jungle to write his 1985 single Old Man Down The Road. (Feel free to add your own examples in the comments.) Today's post is another notable example of self-plagiarism but, in this case, the Bar-Kays had a good reason to revisit old glories. 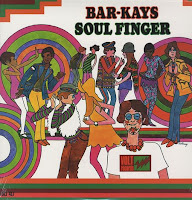 Released in October 1968, the fittingly titled instrumental Copy Kat was a transparent attempt to duplicate the sound, feel and chart success of the band's debut single, Soul Finger, a top-20 pop hit during the spring of '67. Couldn't blame them, really: The previous December, most of the Bar-Kays perished in the same plane crash that killed Otis Redding, whom the band had been backing. The two remaining members (bassist James Alexander, who wasn't on the flight, and trumpeter Ben Cauley, who somehow survived the crash) assembled a new lineup and recorded Copy Kat, an apparent attempt to link the old Bar-Kays with the revamped Bar-Kays.

It didn't work, at least commercially. Copy Kat did nothing at radio and even less on the charts despite sharing many of Soul Finger's distinctive elements, most notably the dubbed-in party noise. But, listening to the track today, the son of Soul Finger sounds even more exciting than its parent song. The stabbing horn chart and na-na-na chanting combine for an infectious hook, while Michael Toles's blistering lead guitar and Alexander's rapid-fire bass during the chorus push the song's intensity into the red. If Copy Kat doesn't get your party kick-started, chances are nothing will.

Copy Kat's commercial failure didn't deter the new-look Bar-Kays. They'd back Isaac Hayes on his landmark 1969 album, Hot Buttered Soul, then enjoy varying success under their own name throughout the 1970s and '80s. The Bar-Kays' legacy received a little boost last year when Soul Finger and Too Hot to Stop appeared in box-office blockbuster Superbad.

And here's what appears to be the original Bar-Kays playing Soul Finger:

I love that track. It's one of my all time faves from the Stax library.

Nice to read about it's background.

Hey, Antony, glad you like this track, too. The first time I heard, it, I was playing my Stax box set while doing some household chores and this track just stopped me cold. I can't believe the Bay-Kays came out of such tragedy with a song as joyous as this.

Dude on the left in the picture is holding a Telecaster like Steve Cropper's.