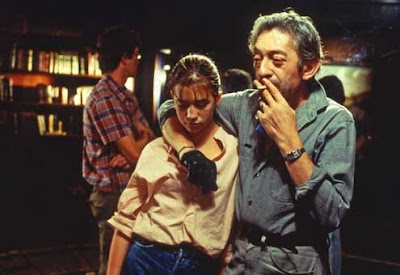 Up in heaven, Serge Gainsbourg is surely laughing. Only after banging a young hottie and sucking back a good smoke, of course.

That thought went through my mind when pictures of teen-pop superstar Miley Cyrus posing with her dad, country music has-been Billy Ray Cyrus, appeared in Vanity Fair earlier this month. There was outrage in some corners of the media and blogosphere as many believed 15-year-old Miley looked more like Billy Ray's jailbait girlfriend than his teenaged daughter. And, with Miley perched between Billy Ray's legs, the media critics might have a point. (See photo here.) 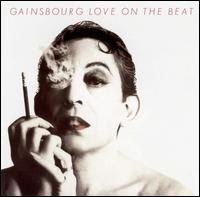 But this Cyrus family photo is as provocative as a Little House on the Prairie episode compared to Lemon Incest, a 1984 duet between French icon/notorious provocateur Gainsbourg and his then 12-year-old daughter Charlotte that closed his Love on the Beat LP (pictured right). The song's melody is derived from Chopin's Etude Op. 10, No. 3 but the track remains a product of its era — all synthesizers and sequencers — unlike the timeless brilliance of his late-'60s, early-'70s output. Histoire de Melody Nelson, it is not. And chances are, without its subject matter, the track would be judged an unremarkable contribution to the Gainsbourg ouevre.

But Gainsbourg being Gainsbourg, the subject matter is taboo-shattering and, according to many, sick. "The love that we will never make together/ is the most beautiful, the most violent/ The most pure, the most heady" is a rough translation of one of the lyrics. You don't need to know a word of French to assume Serge and Charlotte aren't singing about selling Girl Guide cookies door-to-door; their voices — his gruff, hers breathy — entwine like Serge's sexually charged duets with Charlotte's mom, Jane Birkin.

For me, Lemon Incest is one of those songs that I find too disturbing for my tastes yet, as someone fascinated by the history of pop music, I'm intrigued a significant artist dared to push this particular envelope.

Serge Gainsbourg died of a heart attack in March 1991. Charlotte turns 37 in July; she continues to work as a singer and actress, recently appearing in the Bob Dylan biopic I'm Not There and singing Just Like a Woman on the soundtrack.

And here's the video for Lemon Incest. Now I ask: Still have a problem with Miley and Billy?