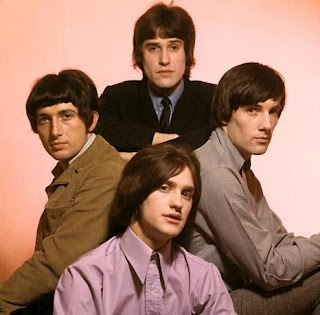 It's Victoria Day in Canada and, to mark the national holiday, I was initially tempted to write about Victoria, the Kinks' 1969 single and opening track from Arthur (Or the Decline and Fall of the British Empire). But that seemed too damned obvious. Even so, I spent the day listening to Arthur for the first time in a long time and, approaching it with fresh ears, I was again blown away by the deftly executed story arc, Ray Davies's resourceful production and the sustained quality of his songwriting. Arthur was the band's third consecutive masterpiece — following 1967's Something Else and 1968's The Village Green Preservation Society — and arguably the last, truly great Kinks record.

Look past the album's singles, Victoria and Days, and fan favourite album tracks Shangri-La, Australia and the harrowing anti-war anthem Some Mother's Son and you'll find a treasure trove of lesser-known Kinks klassics like today's post, where the band's early power-chord impulses make a mighty return. That said, it's not exactly You Really Got Me, Part 2: Horns bolster the electric guitars, the bridge sounds like it comes an entirely different song and the vocals are inexplicably buried in the mix. Listen closely, though, and you'll make out some scathing observations on the perpetuation of the class system:

You look like a real human being
But you don't have a mind of your own
Yeah, you can talk, you can breathe
You can work, you can stitch, you can sew
But you're brainwashed...
You're conditioned to be what they want you to be
And to be happy where you are
Get down on your knees

Strangely, Davies has always looked upon Arthur with disappointment. The album was originally conceived to soundtrack a musical television drama but, while the Kinks finished the songs, Granada-TV withdrew its support. "On the whole, I remember (Arthur) for what it might have been rather than what was eventually realized," Davies wrote in his autobiography X-Ray.

I can't help but think that, had circumstances been different, we'd now agree the best thing about Arthur: The TV Drama is its evocative, inspired music.

And, from 1969, here are the Kinks performing Days: