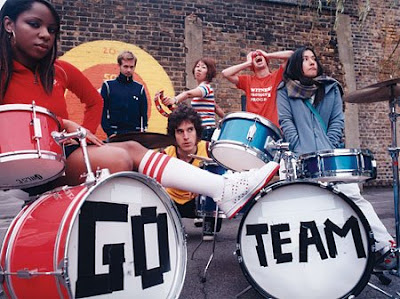 Forgive me, dear reader, if I seem a little too excited about the imminent arrival of summer. In my corner of the world, we had snow in January. And February. And March. And April. And, yes, May, too. But, today, the sun is shining, the mercury is rising and those lazy, hazy days of summer don't feel so far away anymore. I might even store the snow shovel in the garage today. (Yes, that is a tear of joy now falling down my cheek.)

So, from 2005, here's Bottle Rocket by Brighton six-piece The Go! Team — an exhilarating whir of primary-coloured dance-pop that layers old-skool rap; cheerleader chants; vinyl scratching; live drumming, and swinging a punchy horn arrangement. The lo-fi production actually enhances the song — everytime you listen to Bottle Rocket, you hear something else hidden in the mix. And, if you're like me, once the track ends, chances are you'll be reaching for the repeat button.

The version of Bottle Rocket posted here comes from the original Memphis Industries pressing of the band's debut, Thunder Lightning Strike, and not the remixed, markedly inferior version that was released in North America a year later.

The Go Team! returned last year with its sophomore album, Proof of Life. Here's the video from its leadoff single, Grip Like A Vice: