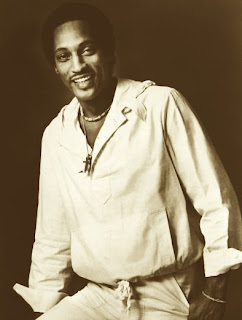 Barry White was a big, big man but, in 1974, there still wasn't enough of him to go around. Thank goodness for Johnny Bristol, who helped to meet the era's insatiable demand for satin-upholstered R&B makeout music with Hang On In There Baby, a track so seductive, some of you dear readers likely exist because of it.

Mind you, Bristol was no opportunistic coat-tail rider. He spent most of the previous decade as a singer, songwriter and producer for Motown Records where he worked with many of the label's biggest names and did so quite stealthily due to the large shadows cast by Norman Whitfield and Holland-Dozier-Holland. Nevertheless, Marvin and Tammy's Ain't No Mountain High Enough and Your Precious Love? Bristol co-productions. Diana Ross & The Supremes Someday We'll Be Together? A Bristol production and co-write, and that's even him singing response to Ross's lead. Edwin Starr, David Ruffin, Smokey Robinson & the Miracles, Gladys Knight & the Pips, Jr. Walker & The All-Stars? They all benefitted from Bristol's wide-ranging talents at one time or another.

Bristol left Motown in 1973 and, after a brief stint as Columbia's in-house producer (where he helmed Boz Scaggs's Slow Dancer LP), he moved to MGM to launch his solo career with a song he wrote and produced just for himself, Hang On In There Baby. 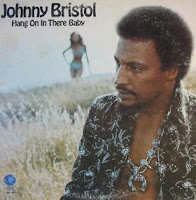 "When I heard the final thing, I flipped," recalled Bristol of the recording. "You see, after I'd finished putting down the vocal, . . . we spent a lot time sweetening the track, getting the strings and the girl chorus integrated into the sensuous feeling I wanted . . . Sometimes, you can tell a new recording's a hit. With Hang On In There Baby, I could taste it."

The song is constructed using the tried-and-true Barry White/Love Unlimited Orchestra formula: A gentle intro of high hat, liquid bass, electric piano and whispered sweet nothings; cue wah-wah guitar, harp and finally the whoosh of the full orchestra as Bristol — in his best deep, lurrrverman voice — promises his lady friend to lead her to "that sweet moment of surrender" and "to give you more than you ever dreamed possible." (Sadly, you know it's just a matter of time until the Viagra folks co-opt this tune). In a year when White classics Love's Theme, Can't Get Enough of Your Love Babe and You're The First, The Last, My Everything were all huge hits, no wonder Hang On In There Baby also found millions of receptive ears and promptly scaled pop's top-10, just as Bristol thought it would. Alas, nothing else he recorded under his own name would enjoy similar success, although he remained active into the mid-1990s.

Hang On In There Baby (link expired)

Finally, I'd be remiss not to mention the death of soul singer Al Wilson, who succumbed to kidney failure last week at age 68. Like Bristol, Wilson also enjoyed his biggest-ever hit in 1974 with Show and Tell. That same year, Bristol produced some tracks for Wilson, including the much-loved La La Peace Song.

Here's Wilson performing Show and Tell on Soul Train from 1974: