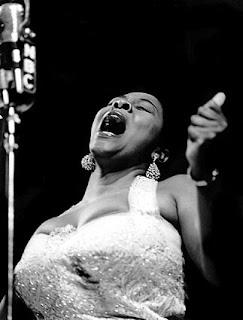 In the last four years of her too-short life and career, Dinah Washington came under fire from critics for supposedly pandering to the marketplace by recording a series of string-smothered, mainstream pop songs.

The criticism didn't stop her, of course: By then, the Swingin' Miss D's had long established a reputation for singing whatever she damn well pleased. You gotta love a performer who's as comfortable crooning a silky pop ballad like What a Diff'rence A Day Makes as she is sinking all of her bluesy chops and womanly wiles into something more salacious, like 1949's Long John Blues or its close relation, Big Long Slidin' Thing.

Recorded for Mercury in 1954, Big Long Slidin' Thing finds a 30-year-old Washington pining for her absent man who's apparently proficient with his extraordinary instrument — a trombone (cough, cough), naturally. Such sexual double-entendres were commonplace in "suggestive" R&B of the era (Big Ten-Inch Record; It Ain't The Meat; I Love To Play Your Piano, Let Me Bang Your Box) but Washington infuses her naughty wordplay with charged eroticism, tranforming a mere novelty song into a sexual tsunami. Washington was often called The Queen of the Blues; on Big Long Slidin' Thing, she proves she also could be Queen of the Blue.

And here's Washington, two years later, performing the G-rated I Don't Hurt Anymore. If you're not amazed at how she could be convincing singing naughty and nice, ask yourself: How do you think Diana Krall would handle My Humps?