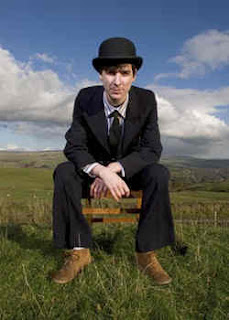 It's the mark of a great song when you can vividly remember where you were, and what you were doing, the first time you heard it.

For me, Jim Noir's Key of C was one of those songs. In January 2006, I was saving the rainforests and listening to BBC6 when this fizzy pop confection stopped me in my tracks. (On second thought, maybe I was just tidying the house and not saving the rainforests — honest mistake — but I swear the rest of the story is accurate.) I rushed out to buy the Manchester one-man-band's freshly minted debut Tower of Love and the deal was sealed. I was a fan.

I had no choice, really. I have a soft spot for the Beach Boys circa 1966-71, for eccentric English psychedelia, for bubbly laptop pop — and Mr. Noir (Alan Roberts to his ma and pa) tickles all of these pleasure centres. He has a whispery, high-pitched voice similar to Robert Wyatt's; he multi-tracks this voice to create harmonies that'd make Brian Wilson shed a tear; and his songs are all perfectly formed pop that nevertheless operates by its own unconventional rules. At Chez Bongo Jazz, Tower of Love was on heavy rotation throughout 2006 and '07.

The album included the forementioned Key of C ...

... but also today's post, I Me You I'm Your, a song that's so damn catchy and pleasing to the ear (with its twinkling synths, Macca bass, church organ, ba-ba-ba refrains) that you might not immediately realize the slight, oft-repeated lyric is pretty much nonsense.

I Me You I'm Your (link expired)

I'm glad to report Noir's self-titled second album, which hit stores earlier this month, avoids the sophomore jinx and builds upon Tower of Love's many strengths. If you like today's posts, I recommend Tower of Love and the new disc with utmost confidence.