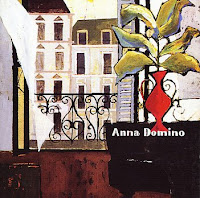 As Leslie Feist collected five Juno Awards last weekend in my hometown, I thought about Anna Domino, whose superb 1986 debut (pictured left) could have provided the musical blueprint for 1-2-3-4 singer.

Unlike Feist, however, Domino's Euro chill-out sounds didn't register even the slightest blip on the mainstream radar, at least in North America. Her music is ripe for rediscovery. 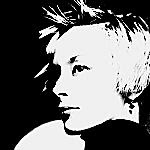 Admittedly, Domino's inaugural effort now sounds somewhat dated due to the synths and drum machines employed by co-producers Marc Moulin and Alan Rankine (of Associates fame) but the material and performances remain fresh.

Drunk, the aural equivalent of a vicious hangover, is one of the album's highlights. Fittingly, it gets off to a staggering start as Domino, in a low voice, recalls the events of The Night Before. "To think you swallowed all that junk," she sings with barely concealed contempt, "with those people that you now despise." The song finds its groove in time for the chorus, when Domino asks her perpetually wasted subject: "What'll it take to break you?/What'll it take to make you rise above it?" Drunk ends up being the rarest of pop songs — an intervention you can dance to.

Domino's sophomore album, 1987's This Time, marked a dip in quality but had some fine moments, especially the title track and the single Tempting (below):