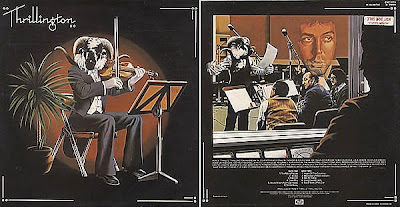 In all the top people's diaries, November 8th is a red letter day — Paul and Linda McCartney are holding a ball to celebrate their next album. Meanwhile, McCartney Productions has apparently made a signing. Percy Thrillington (that's for real), an Irish bandleader, is the lucky man. His first release is likely to be an instrumental version of Ram.
— Rolling Stone, Nov. 11, 1971
Well, this particular Rolling Stone writer got some of it right. Percy Thrillington's first release was, indeed, an instrumental version of Paul McCartney's second solo album but, as we now know, the rest of the story is just a mischievous Macca ruse. (That's for real. Really.) Truth is stranger than fiction in this instance. Just two weeks after the May 28, 1971, release of Ram, McCartney invited arranger Richard Hewson to Abbey Road studios to craft a mostly instrumental version of the album. (Further proof ex-Beatles could do whatever they damn well pleased in 1971.)

McCartney wouldn't play or sing during these sessions, only produce. He'd also hand-pick the pop combo whose basic tracks would be orchestrally embellished; these musicians included bassist Herbie Flowers (Lou Reed), drummer Clem Cattini (The Tornadoes) and the Mike Sammes Singers (whose scatting was wrongly credited to The Swingle Singers for many years). Because Ram was new in shops, most of these musicians hadn't heard McCartney's latest when they recorded its instrumental cousin in a whirlwind, three-day session. The instrumental Ram was mixed the following day, and Paul and Linda started to formulate a back story for their fictitious new signing, Percy 'Thrills' Thrillington, a socialite bandleader from Ireland ...

As the Rolling Stone item suggested, there were immediate plans to release the instrumental Ram under the Thrillington pseudonym but ultimately the project was put on the backburner as the McCartneys launched Wings with the Wild Life album that December. Percy's career appeared over before it even began; he'd surely be upset if he, you know, existed. Then out of the blue, in April 1977, the six-year-old Thrillington project finally saw the light of day on EMI's Regal Zonophone imprint. McCartney was mentioned as a friend of Percy's in the liner notes (penned by Macca under yet another pseudonyn Clint Harrigan) but otherwise there was no suggestion the former Beatle was involved in the record. And without his cachet, Thrillington went unnoticed and quietly slipped into obscurity, where it continues to reside despite being briefly reissued on CD in 1995 and 2004.

Shame, that. Ram, after all, ranks among McCartney's finest solo works and its songs are strong enough to withstand Thrillington's radical reinvention. Certainly, the complex structures of Uncle Albert/Admiral Halsey and Back Seat of My Car (posted below) welcome the orchestral treatments, while slighter Ram tracks such as Ram On and Monkberry Moon Delight are utterly transformed by their new jazz-swing arrangements. As such, Thrillington is neither an act of artistic folly nor mere Beatle-related curio; it's a charming album in its own right, albeit in an easy-listening vein. And here's the good news: It has been made available once again, this time on iTunes. If enough people rediscover it, maybe Percy will come out of retirement to tackle Back to the Egg.

Back Seat of My Car (link expired)

A final bit of trivia about Thrillington's version of Back Seat: Following the track's piano coda, you can hear water dripping. That's the sound of Abbey Road's leaky toilets, carefully recorded by McCartney and engineer Alan Parsons.