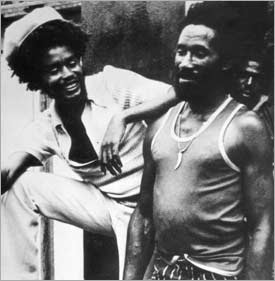 Max Romeo and producer Lee Perry (pictured, from left) were both at the peak of their powers when they recorded the 1976 reggae milestone War Ina Babylon at Perry's Black Ark studios. One Step Forward, I Chase The Devil and the title track were the album's calling cards but its other six tracks were equally outstanding, including today's post, a powerful, journalistic look at the cruel, unjust chasm between the rich and poor.

Romeo — born Maxwell Smith in Saint D'Acre, Jamaica in 1942 — grew into his role as a social commentator. His stage surname was surely chosen to complement the sweet love songs he initially recorded, although it was the lascivious Wet Dream that established his name ... and his rude boy cred.

More saucy novelty tracks followed (Pussy Watch Man, Mini Skirt Vision, Wine Her Goosie) but Romeo soon tired of his lover-man image and his political convictions drove him to record more socially conscious material. Romeo aligned himself with the socialist People's National Party (PNP) during his country's blood-drenched 1972 elections and his songs became fervently political and partisan. The PNP romped to victory but, four years later, on the eve of another election, the rich were still rich, the poor still poor. 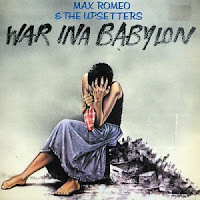 The Romeo-penned Uptown Babies Don't Cry could have been written to remind the young 'people's' government of the work it still needed to do:

Perry's sympathetic production is as vivid as Romeo's lyrics, with swirling organ and horns parts accenting the singer's supple vocal and adding colour to an earthy roots groove. Perry and Romeo's partnership was so symbiotic and produced such outstanding music that the dissolution of their relationship following Babylon's release still seems like a tragic lost opportunity.

Romeo, now 65, is still recording and touring. Here he is singing the title track from War Ina Babylon earlier this year: