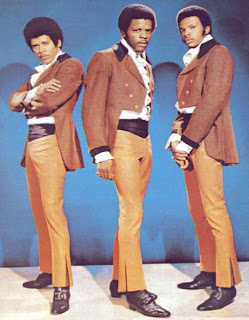 Philadelphia soul is a genre strongly identified with the 1970s but its genesis dates back to the previous decade with groups such as The Delfonics. The hallmarks of Philly soul — the lavish orchestrations, the smooth vocal harmonies, the middle-of-the-road pop sensibilities — are all present and accounted for on the group's first three, Thom Bell-produced and arranged albums (1968's La La Means I Love You, 1969's Sound of Sexy Soul and 1970's The Delfonics). Each of these albums contained one stone classic: La La Means I Love You had its title track, The Delfonics had Didn't I (Blow Your Mind This Time) and Sound of Sexy Soul had the song I'm blogging about today.

I chose Ready or Not Here I Come because, of the group's three big hits, this one is, in some ways, the runt of the litter. It failed to crack to the top-30 in 1969 whereas the other two songs were top-10 smashes. As such, compilers nowadays always seem to default to Didn't I or La La Means I Love You when they're looking to include a Delfonics track. Ready or Not Here I Come has become the group's forgotten hit despite having so many great qualities.

Qualities like the intro, a dramatic 10-second overture with brass and strings that essentially tells the listener: You need to hear this. Then — bam! — we're right into the song's audacious chorus where the trio's vocals alternate between staccato and legato phrasings to stunning effect. At the quarter pole, we finally get to the first verse where William Hart's high tenor soars heavenward as the orchestra swells underneath him. It's sonic nirvana for Philly soul fans — but only for a brief time.

Ready or Not Here I Come is also a frustrating track because, after making such a grand entrance and after taking its time to fully flower, the song meekly fades out after two meagre minutes. Generally, I believe in the 'leave 'em wanting more' axiom but, in this case, one wishes co-writers Hart and Bell

could have made the song a bit longer or at least conceived a better ending than its K-Tel-style premature fade.

That quibble aside, Ready or Nor Here I Come still stands as one of the Delfonics' greatest achievements. By 1970, producer/arranger Bell and the trio would go their separate ways — subsequent Delfonics singles would draw diminishing returns until the group disbanded in 1974, while Bell would apply what he perfected with the Delfonics to create quintessential Philly soul hits with The Stylistics and The Spinners.

Ready or Not Here I Come (link expired)

And, for your viewing pleasure, here are the Delfonics performing La La Means I Love You live on Top of the Pops from July of 1971: