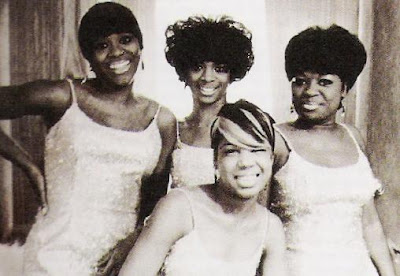 This weekend's opening of army desertion drama Stop-Loss inspires today's Sunday Soul post. Please Uncle Sam (Send Back My Man) was released in November 1966 but surely its sentiment would still resonate among the loved ones of soldiers now serving in Iraq and Afghanistan. Yet the track barely resonated with anyone upon its release; it was the first of four flop singles the Charmels recorded for Stax subsidiary Volt between 1966 and 1968, relegating the vocal group to footnote status in the annals of Memphis soul. Too bad: the songs deserved a much better fate.

The Charmels must have thought the stars had finally aligned for them in 1966 after five mostly fruitless years trading as the Tonettes and the Dixiebelles. Isaac Hayes, a proven hitmaker at Stax, took the trio under his wings, installed lead singer Barbara McCoy as a fourth member and, with partner David Porter, concocted the Charmels' debut 45, Please Uncle Sam (Send Back My Man). 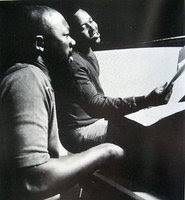 "They wrote songs specifically around my voice," McCoy said of Hayes-Porter (pictured left), "and (the songs) were always sweet and kind of high."

She's right. Please Uncle Sam is not the gritty Memphis soul typically associated with Stax; it has more in common with slicker sounds of Motown and the innocent charms of The Fifth Dimension — which, I stress, is not a complaint.

This is a great track, highlighted by McCoy's yearning vocal and some nice call-and-response between McCoy and fellow Charmels Eula Jean Rivers, Mary Hunt and Mildred Pratcher. The song's emotional punch hits hardest during the bridge when the Charmels recall the last words the much-missed soldier man said before shipping out to Vietnam: "Don't worry baby/Course I love you/I'll be back in a year." You can tell by McCoy's nuanced voice that she understands the promised return could be in a body bag. (Amazingly, McCoy, who had never sung with a secular group before the Charmels, was so nervous in the studio that she insisted the lights be turned down so she couldn't see the people on the other side of the glass while recording.)

Please Uncle Sam (Send Back My Man) did nothing on the charts; ditto for the Charmels' next three Volt singles: 1967's I'll Gladly Take You Back and As Long As I've Got You, another two Hayes-Porter ballads that recall Burt Bacharach and Hal David's work with Dionne Warwick, and 1968's Lovin' Feeling, a funky interpretation of The Righteous Brothers' You've Lost That Lovin' Feeling that proved to be the Charmels' final Volt release. A short and sweet body of work, then, but one worth discovering.