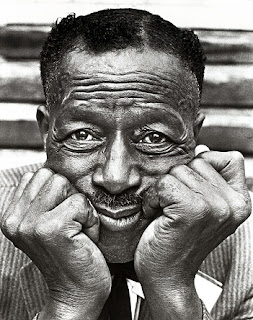 An old man's voice, a pair of hands for clapping/slapping, and a long, hard life lived. That's all Son House needed when he recorded his song Grinnin' In Your Face for producer John Hammond Sr. in April of 1965. The result was two minutes of bracing blues and a prime example of music as unvarnished human expression.

Oh, to be a fly on the wall when 63-year-old Eddie James 'Son' House walked into Columbia's New York City studios to lay down his first recordings since Alan Lomax's Library of Congress sessions produced 19 songs in 1941-42. House was a tall, slender man whose disposition was reportedly as gloomy as his music was intense. Born near Clarksdale, Miss., in 1902, House was at varying times a Baptist preacher, a convicted murderer (House claimed self-defence), a train-hopping hobo, a pioneer of the Delta blues (along with contemporaries Charley Patton and Willie Brown) and an inspiration for Muddy Waters and Robert Johnson. The man is a genuine icon of 20th century music.

Yet, a year before his three-day Columbia sessions, House was working at the New York Central Railroad and claimed he hadn't picked up a guitar in years. Guitarist-researcher Alan Wilson (later of Canned Heat) found House at the railroad; informed the non-practising bluesman of the surging interest in his recordings for Paramount in 1930 and for Lomax; and convinced House to resume his music career, even helping him re-learn his songs and guitar style. 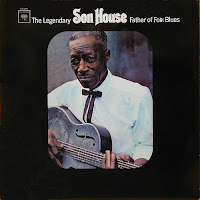 This culminated in a three-day Columbia session released as The Legendary Son House: Father of Folk Blues LP in 1965. (It was re-released in 1992, with an extra CD of outtakes, as Father of the Delta Blues: The Complete 1965 Sessions).

Grinnin' In Your Face is one of two a cappella tracks on Father of Folk Blues and the song's stark intensity is spine-tingling. House had surely seen his share of injustice in his 63 years and, on Grinnin' In Your Face, he paints a world where deceit trumps loyalty and a friendly smile to your face can be followed by a shiv in the back. "You know they'll jump you up and down/They'll carry you all round and round," he sings, "just as soon as your back is turned/They'll be trying to crush you down." His voice still possesses the passion of a young man but the years have made it worn and weakened. The imperfection of the performance (listen to his voice give out at 1:21) and the intimacy of the recording (you can hear every intake of air and almost smell his breath) make Grinnin' In Your Face utterly compelling; when it's playing, it demands your full attention. You can't listen to it passively.

The Columbia sessions would be House's last studio recordings, although he toured into the 1970s. Alzheimer's and Parkinson's forced House to stop performing in 1976; his last 12 years were spent in Detroit, where he died on Oct. 19, 1988.

Grinnin' In Your Face (link expired)

And from 1967, here's Son House playing Death Letter, a song later covered by The White Stripes on De Stijl: