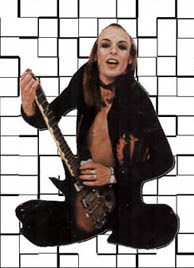 Brian Eno is known to be many things: Innovator. Theorist. Egghead. But humourist? Not so much.

Yet Eno's 1973 solo debut, Here Come The Warm Jets, is actually quite funny — in a subversive and absurdist way rather than a Weird Al Yankovic way. First of all, there's the album title: 'Warm Jets' sound kind of mysterious and exotic until one discovers it's merely Eno's euphemism for, um, urination. (Better than naming your record Here Comes The Piss, mind you.) Then there's Dead Finks Don't Talk, a hilariously bitchy skewering of Eno's former Roxy Music bandmate Bryan Ferry. Or so goes the story.

Eno initially denied the song was directed at Ferry, pointing out the album's lyrics were all randomly generated. So it was purely co-incidence, then, Eno addresses a subject who's "always so charming" but also a "headless chicken" with a "bad sense of direction." So, in no way should listeners think the line, "to be a zombie all the time requires such dedication," is about the perpetually cool, seemingly bloodless Ferry. But, um, how does one explain the mocking Ferry impression at the 1:14 mark?

Eno later admitted that, yeah, maybe he was taking the piss, albeit unwittingly.

"Dead Finks Don’t Talk is the most randomly generated of my songs. I wrote the lyrics at home with my girlfriend with a cassette of the backing track from the studio. I sang whatever came into my mind as the song played through ... (Producer) Chris Thomas said, ‘you’ll get me shot for that track. It’s obviously about Bryan.’ So I listened back to it and it obviously was. It was certainly something I hadn’t realised."

If Ferry carried a grudge over the song, he has apparently put it aside. Eno revealed in 2006 that he contributed two tracks and played keyboards on the long-gestating Roxy Music reunion album. Maybe Ferry can laugh about Dead Finks Don't Talk now. At least he's got to admit: It's a helluva lot funnier than Music For Airports.

And, from 1972, here's Roxy Music with a leopard-skinned, knob-twiddling Brian Eno playing Ladytron on The Old Grey Whistle Test:

Would you upload the song again? I'd really love that.