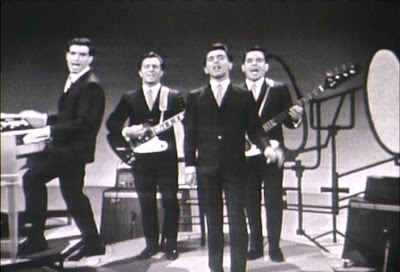 What will be actor Joe Pesci's most enduring contribution to pop culture? Showing moviegoers how to kill a man by stabbing him in the jugular with a ballpoint pen surely will garner a few votes. However, 35 years before his role in Casino, Pesci played an integral but often unheralded role in shaping 1960s pop when he introduced a couple of his Jersey pals, Bob Gaudio, a talented keyboardist/songwriter/arranger, and Francis Castelluccio, a doowop tenor with a stratospheric falsetto who'd soon change his name to Frankie Valli. Pesci's two pals would strike up a creative relationship that would allow their band, The Four Seasons, and Valli's concurrent solo career to challenge The Beatles for chart supremacy for much of the 1960s. 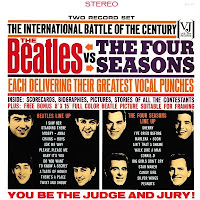 (U.S. label Vee-Jay, which owned the rights to the early masters of both groups, took advantage of the situation by releasing the two-LP compilation The Beatles vs. The Four Seasons, in October 1964. "The international battle of the century," the front cover proclaimed. "You be the judge and jury!")

Those early Four Seasons chart-toppers (1962's Sherry and Big Girls Don't Cry, 1963's Walk Like a Man) thrust the group to stardom but, artistically, the best was still to come. Gaudio's songwriting and Bob Crewe's production made huge strides between 1964 and 1967 and many of the Four Seasons' songs from this golden era represent some of the greatest pop music of all time. Today's post, a top-5 hit from March of 1964, is my all-time favourite Four Seasons track, a bittersweet, class-conscious tale of selfless love soundtracked with a driving rhythm, sophisticated arrangement and widescreen Phil Spector-styled production. 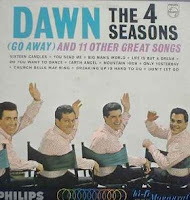 "Pretty as a midsummer's morn/They call her Dawn," Valli swoons prettily at the start the record ... but this is no ballad. As the harmonies fade, the song kicks into gear with galloping drums (the stickwork on this track is outstanding), glockenspiel and stacks o' vocal harmonies as Valli dissuades his true love from falling for him and guides her into the arms of a wealthier boy.

"Think what a big man he'll be/ Think of the places you'll see/ Now think what the future would be with a poor boy like me," implores Valli, who takes a potentially corny pop storyline and infuses it with genuine heartbreak and street smarts. His vocal performance suggests Valli, the son of a barber and an Italian immigrant, could empathize with the song's "poor boy" and his plight. Surely others did, too. You can hear echoes of this tough yet tender Gaudio-Sandy Linzer song in fellow Jersey-ite Bruce Springsteen's Rosalita (Come Out Tonight) and especially in Billy Joel's 1983 hit Uptown Girl.

So how did this exciting, ageless track not soar to No. 1 in its day? There were three reasons, actually: (1) I Want To Hold Your Hand, (2) She Loves You and (3) Please Please Me. In the International Battle of the Century, give this round to the Beatles.

And, from 1962, here are the Four Seasons performing Big Girls Don't Cry: