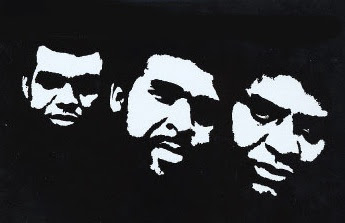 Driving home after clocking several overtime hours today — on a long weekend, no less — I mulled my options for this week's Sunday Soul feature. Work To Do seemed like a natural.

The Isley Brothers were smack-dab in the middle of their 1969-75 purple patch when they recorded this smokin' track for their Brother, Brother, Brother album. The 1972 long-player officially debuted the definitive Isleys lineup that saw Ronald, O'Kelly and Rudolph Isley joined by younger siblings Ernie (guitar) and Marvin (bass), as well as brother-in-law Chris Jasper (keyboards). Bigger was better in the Isleys' case and, on Work To Do, the group seamlessly blends Latin and funk influences with its trademark three-part harmonies. Nice work on the woodblock, too.

But it's Ronald's lead vocals that make Work To Do an unofficial anthem for everyone who believes work-life balance is for wusses. The song's narrator has been working a lot of long nights to bring home some dough and, even though he acknowledges his woman wants to spend more time with him, he tells her straight-up that it just ain't gonna happen. Then Ronald offers his little lady this helpful advice:

"So keep your love light burning and a little food hot in my plate/You might as well get used to me coming home a little late."

In other words: I'll be home when I get home but, when I do walk through that door, I expect a hot meal and hot loving, maybe not in that order. The feminist movement must have loved this song back in the day.

Work to Do was released as a single and peaked at a modest No. 51 on the pop charts, although it is now rightfully considered one of the Isleys' greatest moments. (The song later charted for Average White Band and Vanessa Williams.) And yet, in 1972, the Isleys were just getting warmed up for the following year's classic 3+3 album and That Lady single.

Work To Do (link expired)

For your viewing pleasure, here are the Isleys performing their first hit, Shout, in 1959. Ronald is a ball of energy but, um, who's in charge of choreography?