On a recent record-buying binge, I snagged a copy of Sons & Daughters' second full-length album, This Gift. Admittedly, it was an impulse purchase. I did enjoy a couple of songs (Dance Me In, Taste The Last Girl) off their 2005 full-length debut, The Repulsion Box, and I did like the fact the Glasgow quartet often sounded like X's distant Scottish cousins, right down to the girl-boy tag-team vocals. On the whole, though, The Repulsion Box was merely OK and I wasn't exactly pining for a followup.

Stupid me. This Gift is a massive improvement over the debut, so much so, in fact, I checked the credits to see if Sons & Daughters had retooled their lineup since Repulsion. (They did not.) Over the ensuing three years, they've simply matured as songwriters and performers, and the decision to hire former Suede guitarist Bernard Butler to produce turns out to be a masterstroke.

Whereas the roughly hewn Repulsion Box sounded like four people banging out their songs in the same room as the tapes rolled, Butler helps the band capture myriad guitar sounds, add punch to the rhythm section and, most importantly, put the spotlight on group's top asset, Adele Bethel's lead vocals, which are big yet nuanced, supple in tone yet snarly in attitude. 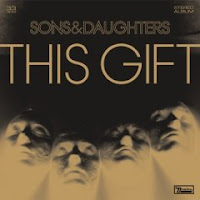 This Gift is proof that high production values is not always synonymous with 'corporate sellout.' Yes, the new album is far more polished than The Repulsion Box but it's also far more powerful.

But the mystery of a vastly improved sophomore album shouldn't be explained by suggesting 'the Butler did it.' This Gift is crammed with memorable guitar riffs and stick-in-your-head choruses; in fact, there isn't a duff moment in these 12 tracks (all credited to the band) as the 40-minute album moves from strength to strength, each song getting under your skin after just a few spins.

Split Lips is deadlocked in a 12-way tie for my favourite track off This Gift but I'll choose to post this one for a couple reasons: (1) the intro and Bethel's vocal are reminiscent of Patti Smith Group's magnificent Dancing Barefoot, and (2) the biting lyric: "You never asked for an audience/So why'd you care about the reviews you're gonna get?"

On This Gift, Split Lips follows the opening track and first single Gilt Complex, the video for which is posted below.