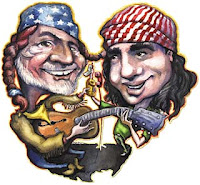 Willie Nelson is clearly still capable of greatness but, over the past decade, his records have travelled the not-so-long highway that runs between workmanlike and reasonably inspired, making room for the odd detour (and with 2005's reggae album, Countryman, I mean odd).

He has yet to scale his late-career twin peaks of Spirit (1996) and Teatro (1998), of which the latter could be reasonably called the last essential Nelson album. Named after the Mexican movie theatre where it was recorded, Teatro was helmed by Daniel Lanois, who slathers the songs with his characteristic thick, swampy ambience while keeping his eye firmly fixed on the quality control monitor. Lanois did the same thing to revitalize the careers of Robbie Robertson on his 1987 solo debut, Bob Dylan on 1989's Oh Mercy and Emmylou Harris on 1995's Wrecking Ball — and Teatro fits comfortably in this illustrious company. The album doesn't contain a duff moment but Nelson's cover of his producer's composition The Maker stands out from a collection of standouts.

The song originally appeared on Lanois's 1989 solo debut, Acadie, and if Nelson's version sounds similar to the source material, it should. Many of the same players perform on both (guitarist Lanois, organist Malcolm Burn, percussionist Cyril Neville, bassist Tony Hall, drummer Willie Green), and both versions are carried by a distinctive, burbling bassline and layers of melodic, distorted electric guitar.

That said, the original had neither Nelson, the master interpreter of song, nor the spectral background harmonies of Harris (who'd release her own version on 1998 live set Spyboy). Those two new elements make this version of The Maker something special. Certainly, Nelson's leathery, well-weathered vocals are perfectly suited for lyrics that embrace nothing less than the mystery of Almighty and the afterlife. When he sings "my body is bent and broken/by long and danger sleep," that voice has all the necessary gravitas and life experience needed to convey the acceptance of mortality and to dive into the song's deep well of spirituality. Nelson inhabits The Maker in the same way Johnny Cash inhabited Hurt.

Lanois and Harris recorded superb renditions of The Maker but, by abetting Nelson here, the definitive version is on Teatro.

And here is footage from the recording session: