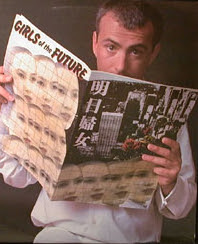 Nowadays, BB Gabor is remembered, if he's remembered at all, for his 1980 single Nyet Nyet Soviet (Soviet Jewelry), a minor Canadian hit that tapped into the rising Evil Empire sentiment of the Cold War era. (It wasn't just trendy, anti-Soviet propaganda either. Gabor and his family fled their native Hungary in 1956; the year the USSR invaded the country to crush a nationwide revolt against its Stalinist government. Gabor's dislike for the Soviets was, by all accounts, very real and very personal.)

Nyet Nyet Soviet's buzzing, distorted guitar and a pogoing rhythm meant the man born Gabor Hugedus would be initially marketed as an edgy, Queen St. new waver even though he was 32 at the time, only five years younger than officially sanctioned 'boring old fart' Mick Jagger.

The modest success of Nyet Nyet Soviet and its self-titled parent album allowed Gabor to release an unloved followup, Girls of the Future, in the fall of 1981. Co-produced by Eugene Martynec (Bruce Cockburn, Rough Trade), Girls of the Future's sound was slicker and more middle-of-the-road than his fizzy debut yet, on the lyrical front, Gabor's humour-leavened cynicism had hardened into unremitting bitterness. The venom he saved for the Soviets a year prior was now being shared with the rest of the world.

Little Thing, one of the sophomore album's many flop singles, represents this shift. No one would use the words 'new wave' to describe the sound of this mellow, mid-tempo pop ballad, which begins with a nagging synthesizer riff and closes with an equally catchy, sing-along coda. The song would be pleasantly benign if not for Gabor's vicious haranging of the titular subject, a spoilt rich girl trying to ingratiate herself with the underground crowd. Listening to Little Thing, I imagine Gabor writing the song and thinking to himself: "Dylan's Like A Rolling Stone is pretty good, you know, but it's just not nasty enough."

And Little Thing is nasty. You could made an argument for "misogynist" too. Still, give him credit for trying to slip this bile onto top-40 radio:

"I don't think you've made it yet/You're mommy and daddy's blameless litle pet/You could use a few home truths/And a little less smack and a little less booze/I can't see where you fit in/Can you, little thing?/...I'm scratching and I'm biting and you're just giving in/Your street credibility has worn a little thin/Isn't it true, little thing?"

Despite its heroin reference, I remember Little Thing receiving modest radio play in the winter of 1981-82 but, after that, Gabor fell off the radar. His label, Anthem, dropped him after Girls of the Future. He moved to Vancouver for a time before returning to Toronto. In the late-'80s, Gabor supposedly recorded some tracks with Todd Rundgren but, to my knowledge, they have never surfaced. There was never a third BB Gabor album and, in 1990, the diagnosed manic depressive took his own life.

Gabor's two albums are worthy, early-'80s curios and are available on a single CD through Pacemaker Entertainment Ltd.

Soviet Jewelry is what I'm best acquainted with. Summer of my High School graduation marked a bit of a change and allowed me my musical eccentricities free of the always prevalent social norms.

Initially, I thought that song featured an electric razor as lead instrument.

Thanks for the blast from the past.

You're welcome. I have a soft spot for BB. There were some unusual singles on AM radio in 1980 -- think Gary Numan, think Flying Lizards -- and Nyet Nyet certainly falls into that category. Nicely broke up all that Christopher Cross and Air Supply. Thanks for reading.