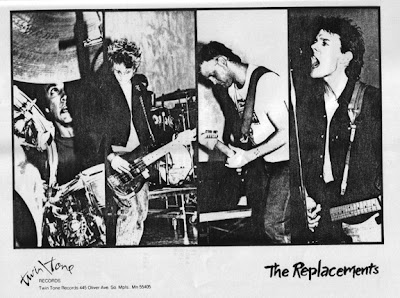 Every title comes with a generous selection of bonus tracks (see below) and one should expect Rhino to do its usual top-notch remastering job on these titles, which have always been poorly served on CD. (Which is a nice way of saying they sound like crap and the liner notes are virtually non-existent.) The TwinTone remasters are due in record shops April 22.

Sorry Ma, Forgot To Take Out the Trash

Get on the Stick, studio demo

A Toe Needs a Shoe, outtake

If Only You Were Lonely

Staples in Her Stomach, outtake

You're Getting Married, solo home demo

Let It Be and Pleased to Meet Me likely will be the most coveted reissue titles but here's hoping record buyers will (re)discover Sorry Ma, the ragged, punkish debut that contains several hidden gems in the Mats catalogue: Takin' A Ride, Johnny's Gonna Die (a Johnny Thunders tribute — a live clip of the song, circa 1981, is below) and I Hate Music, which I love for the so-dumb-it's-brilliant lyric: "I hate music/Sometimes I don't/I hate music/Got too many notes!"

Oh, and one final thing: Now that the Replacements are taken care of, let's hope the reissue gods bless us soon with expanded and remastered albums by those other significant '80s Minneapolis acts, Husker Du and Prince. A boy can dream, can't he?

The Replacements had at least one cassette-only release in the early years. I imagine they'd be pretty rough sounding.

I quite enjoy the Replacements.