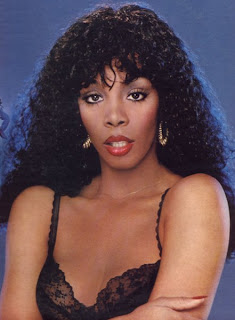 Donna Summer is best known as the undisputed Queen of Disco during the latter half of the 1970s. Which is true, of course, but the work she and producer Giorgio Moroder created between 1977 and 1979 transcended disco and provided the template for all subsequent acts that built dance music with synthesizers and sequencers.

I Feel Love, Summer and Moroder's mesmerizing 1977 single, sounded like a transmission from the future and, in a way, it was.

Outside of Kraftwerk or to a lesser extent Neu!, there was nothing really like it in the pop realm.

Yet I Feel Love was only a warmup for Summer and Moroder, who would devote an entire side of vinyl to similar electronic music on Summer's next two studio double albums, 1977's Once Upon A Time and 1979's Bad Girls.

Our Love is from the latter album and, almost 30 years later, it still sounds dazzling, cool and contemporary. I chose this track for one other reason: The electronic drum pattern on the chorus was lifted by New Order and used as the central hook of Blue Monday, one of the most successful and influential tracks of the 1980s.

Donna Summer was the Queen of Disco, sure, but she was a whole lot more.