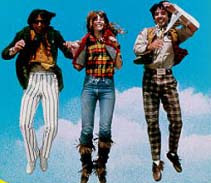 Who recorded the best song titled My Girl?

For my money, the correct answer is Brazil's Os Mutantes, whose A Minha Menina (My Girl in Portugese) is a joyous blast of samba psychedelia that's pretty much guaranteed to put a smile on your face.

Even if you don't know a word of Portugese, you might assume from the spirit of the record that the song is about the first flush of love ... and you'd be right.

A little background: Os Mutantes were Rita Lee, Arnaldo Baptista and his younger brother Sergio Baptista, who released their self-titled debut album in June 1968. Rita and Arnaldo were just 20 years old, Sergio 19, yet they were among a group of musicians, visual artists and poets who helped found and define Tropicalia, Brazil's revolutionary arts movement.

The liner notes of Everything Is Possible!, an Os Mutantes compilation, describe the movement this way:

With hefty doses of criticism, lots of humour, iconoclastic ideas and a sprinkling of rock music, Tropicalia was out to question not only the music being made in the country at the time but Brazilian culture as a whole.

Tropicalia artists didn't seek to destroy the Brazilian identity but combine that identity with what was happening around the world. 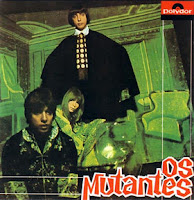 A Minha Menina, the second track on the band's debut, is a prime example of this multicultural approach. The rhythms are unmistakably Brazilian but there's also a touch of San Francisco here, with the garage-rock, fuzztone guitar licks that run through the song.

Alas, by 1969, Tropicalia was all over, as Brazil's military government cracked down on the movement's intellectuals and political activists. Musicians Caetano Veloso and Gilberto Gil, considered leaders of the movement, were jailed for about a month and, upon release, were exiled to London, England. But the government couldn't exile ideas and Tropicalia planted the seeds from which many agree modern Brazilian music sprouted, while the sounds from this period has been hugely influential on the likes of David Byrne, Beck and Stereolab. Veloso has long resumed his career while Gil is now the country's Minister of Culture.

As for Os Mutantes, the lineup of Lee, Baptista and Baptista carried on until 1972, when Lee left. The brothers stumbled along for another six years but their best days were behind them.

Arnaldo and Sergio, minus Lee, dusted off the Os Mutantes name for some 2006 shows, although many critics agreed, with only two-thirds of the original membership present, this was hardly a true reunion.

Remember Os Mutantes this way -- young, fearless, joyous -- sounding like the future is theirs and everything is possible.

You know, I didn't even think of looking Os Mutantes for videos on YouTube -- anything 1968-72 would be pretty cool. Adding them to the blog? Yeah, I should consider that -- I wonder if I'm sufficiently web-savvy to do it! If the blog is suddenly screwed up, you know I tried and failed.