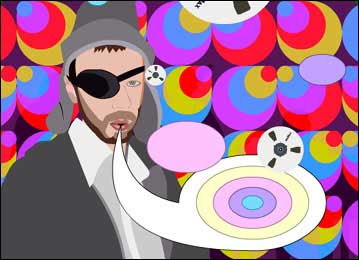 I recently read The Year of Living Biblically by A.J. Jacobs, a non-practising Jew who decided to spend an entire year following the Bible as literally as possible.

I bought the book purely on the premise and was pleasantly surprised Jacobs refrained from simply poking fun at the many strange and often contradictory laws found in the Scriptures. Instead, when confused about Biblical law — 'an eye for an eye' versus 'turn the other cheek,' for instance — Jacobs seeks guidance from his assembled team of spiritual/theological guides.

Their insights are fascinating yet, despite studying the same book, they described the true nature of God in vastly different ways. Some depict Him as vengeful and impulsive; others compassionate and forgiving. 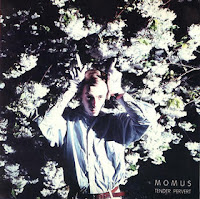 This reminded me of an, um, interesting depiction of the Almighty by Scottish singer-songwriter Nick Currie, better known as Momus.

His third album, Tender Pervert (right), draws its title from leadoff track, The Angels are Voyeurs. The song is surely inspired the Wim Wenders's 1987 film, Wings of Desire, in which two angels wander West Berlin and spy, with increasing envy, the passions and foibles of the city's residents.

It intoxicates the Spaceman, watching how we thrill ourselves/
Not by sex but by devising new ways to kill ourselves/
He sees the way we tamper with the things we most depend on/
The danger stands his hair on end and gives him a hard-on/
He calls his angels down to watch that slut the world get hers/
God is a tender pervert and his angels are voyeurs

So not a typical pop lyric, then, and there are a lot more provocative and darkly comic songs on Tender Pervert, my favourite Momus record (but one that's currently unavailable).

The Angels are Voyeurs (link expired)